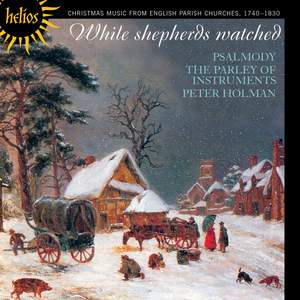 The English Orpheus 40 - While Shepherds Watched

Michael Beesly: While shepherds watched their flocks by night

anon.: Let an anthem of praise

Smith, J C: While shepherds watched their flocks by night

anon.: Hark! how all the welkin rings

Jarman: There were shepherds abiding in the field

Matthews, William: Angels from the realms of glory

Foster, J: While shepherds watched their flocks by night

A Christmas record with a difference! This jolly disc revives the little-known tradition of 'gallery music', suppressed by the Oxford Movement in early Victorian times because it was too cheerful. The title track, for instance, is sung to the tune of 'On Ilkley Moor baht 'at'. Some of the tunes, and almost all of the texts, will be familiar, and all fifteen works vitally capture the enthusiasm of an age newly emerging from a century which had seen Puritanical rejection of the pomp of Christmas, a time, indeed, when 'While shepherds watched' had been the only Christmas hymn tolerated by the Church of England.

The performances on this recording are not meant to be an exact reconstruction of the way these pieces might have been performed by particular church or chapel choirs at the time; it would be futile to try to reproduce the low standards of ensemble and intonation reported in many contemporary descriptions of country choirs. In general, we have tried to find a performing style that draws on the best practice of the time, and matches the directness and vigour of much of the music. The vocal group Psalmody was formed especially for this recording and consists of professional singers, teachers and students drawn mainly from the Colchester area.

A Christmas collection of genuine novelty