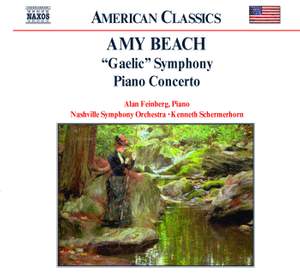 Composed in 1898-9, Amy Beach's ambitious, singularly impressive Piano Concerto is at long last coming in from the cold. An expansively rhetorical Allegro moderato launches the work before a... — Gramophone Classical Music Guide, 2010 More…

Composed in 1898-9, Amy Beach's ambitious, singularly impressive Piano Concerto is at long last coming in from the cold. An expansively rhetorical Allegro moderato launches the work before a playful perpetuum mobile Scherzo and moody Largo (described by its creator as a 'dark, tragic lament'); the finale goes with a delightful swing. In fact, it's a rewarding achievement all round, full of brilliantly idiomatic solo writing (Beach was a virtuoso pianist herself and performed the work many times) and lent further autobiographical intrigue by its assimilation of thematic material from three early songs.
Alan Feinberg brings more charisma to bear than Joanne Polk on her rival account for Arabesque, without any loss of delicacy or poetry, and his collaboration with Kenneth Schermerhorn and the Nashville Symphony undoubtedly generates greater thrust and spontaneity. The recording, too, is more pleasingly spacious, if a little lacking in body.
Following the success of her 1889 Mass in E flat, Beach knew that she needed to produce a large-scale symphony to cement her reputation; it was the Boston premiere of Dvorák's NewWorld that finally spurred her into action.
Responding to the Czech master's exhortation that American composers should turn to spirituals, plantation songs and minstrel-show music for inspiration, Beach selected four Irish melodies of 'simple, rugged and unpretentious beauty', moulding any additional themes 'in the same idiom and spirit'.
That the Gaelic Symphony (1894-6) won golden opinions from the outset comes as no surprise, given its big heart, irresistible charm and confident progress. Schermerhorn and his eager Nashville band give a convincingly paced, tidy performance with real fire in its belly and plenty of character. A thoroughly enjoyable issue.