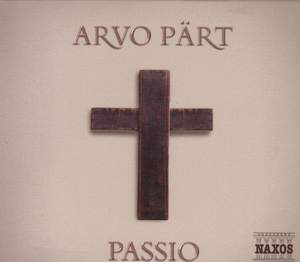 Pärt: Adducunt ergo Jesum a Caipha in praetorium … (Jesus is judged by Pilate and reviled by the people)

Naxos is proud to present a brand new recording of Arvo Part’s Passio Domini Nostri Jesu Christi secundum Joannem, a major milestone in Naxos’ recording legacy and only the third recording of the work to be released on compact disc. Composed in 1982, it is one of the works in which Part uses “tintinnabulist” techniques – the sound or music of bells. “I build with the most primitive materials – with the triad. … The three notes of a triad are like bells. And that is why I call it tintinnabulation”. (Arvo Part). This new recording by Oxford-based ensemble Tonus Peregrinus offers a radically different take on the music from existing recordings. When recording the work, the ensemble followed all Part’s score markings to the letter. After the recording session, the disc was sent to the composer who listened carefully and decided to clarify exactly what he had intended by the score markings; the present recording was then edited according to his new “rules”. This is therefore the very first recording of the Passio to take account of the composer’s recent clarification of precise note and rest durations.

Arvo Pärt's Passio is a shining beacon among countless late 20th-century religious works that confronted the formidable prospect of a new millennium. Put briefly, Passio sets St John's gospel to a simple but powerful triadic musical language, its prescribed forces limited to a small chorus, a handful of solo voices and a chambersize instrumental line-up consisting of organ, violin, oboe, cello and bassoon. Pärt treats the text as paramount and yet there's scarcely a hint of word painting in the accepted sense of the term. Spiritual underlining, yes, with telling support from the solo instruments. There are no written dynamics save for the opening, marked Langsam and forte, and the close, a Largo that blossoms from pianissimo to triple forte. Which doesn't mean that the singers are expected to deliver monotonously uninflected lines. Thankfully, none of them does.
Tonus Peregrinus shape phrases with a certain degree of freedom, just as choirs on rival versions have done before them. And Antony Pitts comes up trumps in his ability to keep lines lively and fluid, blending or clarifying as the text dictates.
His is an excellent reading, always alert to Pärt's shifting harmonic plane and with consistently fresh voices, the women especially. Robert Macdonald's 'inward' portrayal of Jesus is nicely judged and Pitts's instrumental group is more than adequate.
Viewed overall, Tonus Peregrinus and Naxos have done Pärt proud. If this is your first Passio, rest assured that all the essentials are there. And if you want a top-grade specimen of quality music from the past 40 years, you won't find better.
Passio truly is a wonderful work.