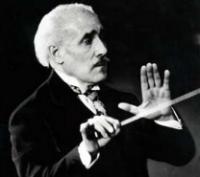 One of the most acclaimed musicians of his era, Toscanini was a conductor of the "old school" - aristocratic, perfectionistic and something of an autocrat on the podium. After a brief flurry of interest in Fascism in the 1910s, he rapidly became disillusioned with the movement and indeed became a personal rival of Mussolini, repeatedly antagonising him through acts of artistic defiance such as refusals to open concerts with the Fascist anthem Giovinezza.

Eventually he fled Italy for the United States, becoming the first conductor of the newly-formed NBC Symphony Orchestra, with whom he pioneered radio broadcasts and recordings that made him a household name in America until his retirement at the age of 87. He gave the premiere performances of several major works, including Barber's Adagio for Strings and the American premiere of Shostakovich's Seventh Symphony.

Find out more at https://en.wikipedia.org/wiki/Arturo_Toscanini