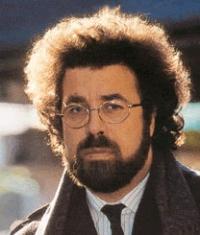 Sinopoli was born in Venice in 1946, studying composition with Stockhausen and initially establishing himself as a composer, with particular interests in electronic music and serialism. After being mentored by Hans Swarowsky in Vienna, he spent a decade as principal conductor of the Philharmonia Orchestra, making especial impact with his interpretations of Mahler, Elgar and Strauss (late Romantic and early twentieth-century repertoire being his principal enthusiasms), and went on to be principal conductor of the Staatskapelle Dresden from 1992 until his death.

Something of a polymath, Sinopoli was also a medical graduate and wrote on subjects as diverse as Greek ceramics and criminal anthropology.

In 2001, he suffered a fatal cardiac arrest whilst conducting a performance of Aida at the Deutsche Oper; his achievements and legacy are honoured each year at the Taormina Festival in Messina.

Find out more at https://en.wikipedia.org/wiki/Giuseppe_Sinopoli