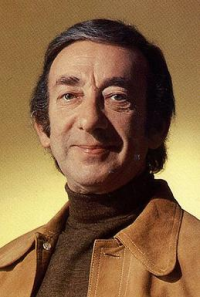 Stanley Black OBE was an English bandleader, composer, conductor, arranger and pianist. He wrote and arranged many film scores, recording prolifically for the Decca label (including their subsidiaries London and Phase 4). Beginning with jazz collaborations with American musicians such as Coleman Hawkins and Benny Carter during the 1930s, he moved into arranging and recording in the Latin American music style and also won awards for his classical conducting.