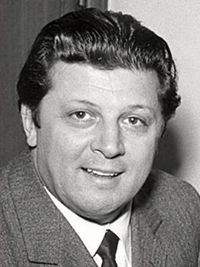 Gianni Raimondi was an Italian lyric tenor, particularly associated with the Italian repertory.

Born in Bologna, Raimondi studied at the Conservatorio Giovanni Battista Martini in his native city with Antonio Melandri, and Gennaro Barra-Caracciolo and in Mantua with Ettore Campogalliani. He made his stage debut in 1947 in Rigoletto at the Teatro Consorziale in Budrio, a small town near Bologna. The following year he made his debut at the Teatro Comunale di Bologna, as Ernesto in Donizetti's Don Pasquale.

After singing throughout Italy (notably in Florence, in a rare 1952 revival of Rossini's Armida, opposite Maria Callas), he made guest appearances in Nice, Marseille, Monte-Carlo, Paris, and London. His La Scala début occurred in 1956, as Alfredo in La Traviata, again opposite Callas, in the famed Luchino Visconti production.