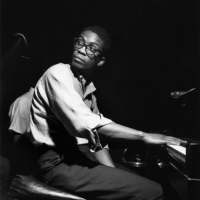 Herbert Jeffrey Hancock is an American jazz pianist, keyboardist, bandleader, composer, and occasional actor. Hancock started his career with trumpeter Donald Byrd’s group. He shortly thereafter joined the Miles Davis Quintet, where he helped to redefine the role of a jazz rhythm section and was one of the primary architects of the post-bop sound. In the 1970s, Hancock experimented with jazz fusion, funk, and electro styles, utilizing a wide array of synthesizers and electronics. It was during this period that he released perhaps his best-known and most influential album, Head Hunters.

Hancock's best-known compositions include "Cantaloupe Island", "Watermelon Man", "Maiden Voyage" and "Chameleon", all of which are jazz standards.