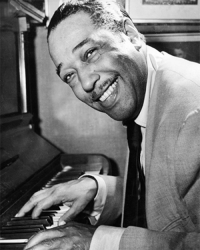 Edward Kennedy "Duke" Ellington was an American composer, pianist, and leader of a jazz orchestra from 1923 through the rest of his life.

Born in Washington, D.C., Ellington was based in New York City from the mid-1920s and gained a national profile through his orchestra's appearances at the Cotton Club in Harlem. In the 1930s, his orchestra toured Europe several times.

Some of the jazz musicians who were members of Ellington's orchestra, such as saxophonist Johnny Hodges, are considered among the best players in the idiom. Ellington melded them into the best regarded orchestral unit in the history of jazz. Some members stayed with the orchestra for several decades.