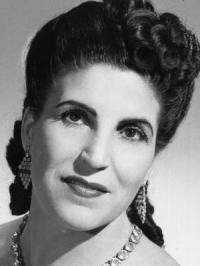 Albanese was born in Bari, and studied with Giuseppina Baldassarre-Tedeschi, one of the first great Puccini sopranos. She made her stage debut in 1934 in the part which would become her signature-role, Madam Butterfly, when she stepped in for an indisposed colleague part-way through a performance in Milan. Following several more successes in her own right throughout Italy, she emigrated to America in 1939, making her Metropolitan Opera debut as Butterfly a year later and becoming a US citizen in 1945.

Albanese’s distinguished colleagues over the years included the great tenors Carlo Bergonzi, Jussi Björling and Jan Peerce (who was frequently Rodolfo to her Mimì, and Pinkerton to her Butterfly), and baritones Robert Merrill and Leonard Warren. But perhaps her closest working relationship was with her countryman Arturo Toscanini, who was renowned for his volatility, but whom she described in interview as ‘a great human man. He had a lot of great heart…From every instrument, he wanted humanity…He wanted from everybody the best’. (A 1946 recording of La traviata certainly shows him eliciting the best from Albanese, not least in a breakneck ‘Sempre libera’ which pushes her to the brink of what’s physically possible, to thrilling effect!)

Interviews and accounts from colleagues reveal her to have been a good-humoured, pragmatic and resolutely un-diva-ish woman, qualities which come across in the unmannered sincerity of her singing and in the practical commitment with which she approached her roles (she reportedly spent time visiting a tuberculosis ward when preparing to sing Violetta).

Though Puccini and Verdi dominated her career, Albanese also had great success in French repertoire (Massenet’s Manon, Marguerite in Gounod’s Faust, Micaela in Carmen), verismo roles such as Nedda in Pagliacci and the title-role in Adriana Lecouvreur, and even Mozart. (She recorded many of these roles and more for RCA Victor). Never tempted to push her voice beyond its comfort-zone into the heavier Verdi roles such as Lady Macbeth, she retained her vocal freshness over the course of a four-decade career (indeed a short video-clip on youtube shows her belting out a top A flat at a celebration purporting to be her 100th birthday - though the date of 2008 makes this unlikely, she’s still clearly well into old age!). After retirement she worked extensively with young singers through her association with the Puccini Foundation, and blogs and social networking forums abound with personal anecdotes of her inspiring words and kindness to emerging artists.

Find out more at https://en.wikipedia.org/wiki/Licia_Albanese

The Italian-American soprano, widely regarded as the finest Madam Butterfly of the twentieth century, has died aged over 100.