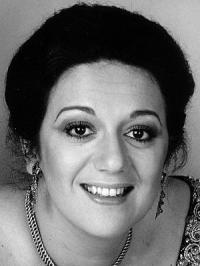 Tatiana Troyanos was an American mezzo-soprano of Greek and German descent, remembered as "one of the defining singers of her generation" (Boston Globe). Her voice, "a paradoxical voice — larger than life yet intensely human, brilliant yet warm, lyric yet dramatic" — "was the kind you recognize after one bar, and never forget", wrote Cori Ellison in Opera News.

Troyanos' performances "covered the full range of operatic history" (New York Times) in an international career of three decades which also produced a variety of memorable operatic recordings, among them Carmen (co-starring Plácido Domingo and conducted by Georg Solti), cited by Classicalite almost four decades later as "the finest of all Carmens." After ten years based at the Hamburg State Opera, Troyanos became widely known for her work with the Metropolitan Opera beginning in 1976, with over 270 performances (several dozen of them broadcast or televised) spanning twenty-two major roles.