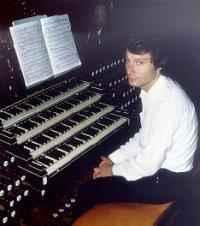 As the artist who has recorded longest with the BIS label, Hans Fagius has an impressive repertoire that includes organ music of several eras. Fagius' early organ lessons were with Nils Eriksson and Bengt Berg. His 1974 soloist's diploma from the Stockholm's Royal College of Music was earned under Alf Linder. That same year, he made his public debut in Stockholm. He spent the following year in Paris, doing private study with Maurice Duruflé. Fagius then began giving concerts, traveling to America and Australia, as well as throughout Europe. Although he has focused more and more on the Baroque, doing his own research into the era, he has performed and recorded organ works of the Renaissance, Baroque, and Romantic eras, and works by Swedish composers of all eras. In the early 1980s in Stockholm, and again in 1996 in Copenhagen, Fagius performed a series of recitals to present the entirety of J.S. Bach's organ works, which he has also recorded. In addition, he has recorded the organ symphonies of Widor; the complete organ music of Kodály; and several duet albums with artists such as David Sanger, organ; Mats Jansson, piano; Rolf Leanderson, baritone; and Gunilla von Bahr, flute.