The double bass has not perhaps made the same impression as a solo instrument as have some others. It's often relegated to its historical function of reinforcing the bass-line, rarely given prominence even in the orchestra, let alone by itself, and thus dogged by the self-fulfilling prophecy that it must somehow be unsuited to the limelight.

In a bid to partially redress the balance and correct the record, the Oyster Duo (newlywed couple Nicholas Schwartz and Anna Fedorova, who named their duo after the oysters over which they first bonded) have assembled a programme of arrangements and transcriptions unashamedly stolen from the repertoire of the cello, violin, piano and voice, capped off with an original composition for the double bass by one of its first true virtuosi, Giovanni Bottesini.

I spoke to Nicholas and Anna about this absorbing celebration of musical kleptomania, and about how the double bass's role has evolved over time.

This album, like much of the double bass repertoire today, is dominated by arrangements. A fundamental question seems to be: Why is this necessary in the first place? Why is there, relatively speaking, so little music for the double bass as a solo instrument?

There is so much great music out there, though much of it was written by composers who didn’t live to see the renaissance of double bass playing which only really blossomed in the last half century. At the time of Beethoven, Brahms, Schubert and Schumann there were exceptions such as Dragonetti or Bottesini, but the general acceptance level of double bass playing was far below what it is today. So, if we wan’t to play some of the great masterworks of classical music, we have to make them work for us. Besides that, it’s the instrument with the largest divide between solo playing and ensemble playing that I can think of, so in normal circumstances people don’t get a chance to hear what it can do. It’s hard to hear, it’s hard to get around with, and it’s hard to play. On the other hand, in the last half century there have been big advancements in the pedagogy, playability, and “foldability” of the instruments (removable necks are common now for air travel)! Because of the instrument’s nature, I’m not sure the situation will ever dramatically change, but at least there is more awareness than ever before of what the instrument is capable of and composers are taking note.

Bottesini’s Tarantella flies the flag for what seems to have been a small school of early double bass virtuosos, centred around himself and Dragonetti. In an age when the double bass did little more than literally double the bass-line, how did these musicians manage to transcend those limitations?

Dragonetti and Bottesini, two major figures in double bass history, were simply musicians who happened to play the double bass! A musician is constantly searching, looking to advance themselves and their music making. The invented their own bows, composed new music for double bass, and were well acquainted with the foremost composers of their day. Dragonetti gave demonstrations to both Haydn and Beethoven, and as a result the bass parts in their symphonies are always highly exciting to perform and play a major role in the music. It is catalogued that Haydn actually wrote a double bass concerto! Though sadly it has never been found. Bottesini himself was an eminent opera conductor and composed pieces on themes from operas he was performing. He would go on stage or into the foyer at the break and perform them for the audience! He also travelled the world performing solo concerts with his double bass, transcending the physical limitations of the large, heavy old wooden travel case in the days before air travel. Bottesini started the double bass briefly before his conservatory audition. He didn’t have much time to learn an instrument so he chose the one with the least competition. He went on to progress double bass technique to the realm of virtuosity, earning the nickname “Paganini of the double bass”.

Most instruments can be played by most people, regardless of build. The double bass is possibly an exception; it’s thought that part of Dragonetti’s secret was his unusually powerful hands. Do you think there are physical prerequisites for mastering the instrument – have you ever had to direct a small-framed pupil towards the cello, for instance?

Many people unfortunately like to judge bass playing simply by how loud it sounds, but I find that thick skulled. I wouldn’t say it’s impossible to be a great player without gigantic physical anomalies - and I should note that there are also many great female bassists who aren’t part time body builders. There are advantages and disadvantages of all hand shapes, body types, and levels of flexibility. The main criteria for me is someone’s artistic spirit, creativity in finding solutions to technical and musical challenges, and willingness to give energy to the music and take risks. That projects through physical barriers. Unlike the violin or cello, there aren’t “perfect” proportions that must be taken into account when being built. Because of this double basses come in all shapes and sizes so there is an instrument out there that will suit any player and style of music!

You yourself are indeed both a double bassist and a cellist. Multi-instrumental doubling isn’t that uncommon – many brass and wind players do it, particularly when teaching – but the conventional wisdom is that being a “jack of all trades” comes at the expense of being master of any of them. How easy is it to maintain two instruments at a top-notch professional standard?

This is a good question and one I’m still discovering myself. It started as a crazy idea for a summer project, but soon became serious! I get inspiration from the “bass” players of 400 years ago, when bass instruments had no standard size or tuning and could be as small as a cello or as big as as the biggest basses of today - you rather played the instrument that suited the piece! I have a difficult time enough reading 3 clefs in two different tunings. I can’t imagine what kind of brain massages they used to get! Ironically, once the musculature in my hands developed for cello playing, I had a newfound flexibility and strength in my double bass playing which I would say is an improvement! I’m afraid now that my double bass playing will suffer if I don’t practice cello for a number of days! People say I am “multi-talented" but I think my main talent is to be daring. Impossibilities suddenly become more possible once one sees somebody else doing them. The difficulty is being the first one. Additionally, I have a high internal “artistic force” and I believe this is well connected to technique - he who fights for the music always finds a way to make the technique work.

The Ginastera suite that opens this album represents an attempt by the composer to bring the folkdance traditions of his native Argentina into the realm of “art” music – not dissimilar to Piazzolla’s efforts focused on the tango. Was this part of a broader movement in South America to elevate the profile of folk idioms?

I can imagine that these pieces were more of a testament to the folk music of Argentina and that he never literally meant for common people to sing with or dance to them. The harmony is too complex and he clouds the simple melodies with incredibly colorful piano writing. There is a long tradition of classical composers drawing from their local heritage for inspiration, and I think this is no different. Perhaps he was affected by the period of political conservatism at the time, which he spoke outwardly against and might have conjured up some nationalistic sentiments.

With the double bass having such a low-pitched, and in many ways quite unobtrusive, sound, how easy is it to balance against the piano in performance? How much did you have to take such factors into account when creating your own arrangements?

The double bass is well suited to more intimate venues where the sound can wrap around and fill the room. Since it lacks that sharpness in the tone, it struggles with more direct projection (though even the cello sometimes has issues with that). For the recording I made sure always to keep the highest quality of sound rather than being worried about projection, since the microphones pick up even the slightest hint of forcing. In a concert setting however, the pianist always has to be conscious of the balance challenges. Anna is a goddess at keeping the musical fire without being overpowering, so long as there is a quality piano at hand that responds to her soft touch, we don’t have too many issues. Sonically, there are only a handful of places where we changed the octave higher or lower in either the bass or the piano so the sound isn’t muddled by us being in the same register. 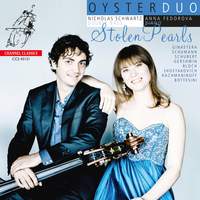