Violinist Peter Sheppard Skaerved has championed contemporary and lesser-known music for much of his career; recently a triple-bill of albums came out that underscored this interest.

In the first, Skaerved explores the Klagenfurt Manuscript, a collection of anonymous Baroque solo works uncovered in a convent; the second sees him reinvent some neglected Schubert by re-presenting it in a way more suited to its "chamber-like" nature; and the third brings us right up to the present day with works from the contemporary composer Edward Cowie (b.1943).

Such an eclectic spread of recordings was a fascinating prospect, so I spoke to Peter about all of them!

The Klagenfurt Manuscript seems to be a first draft in some sense, with errors (perhaps stemming from a composer carried away by the creative process of composition) that would likely be spotted and ironed out by an editor. Do you think this is the case – might there once have been a 'finished version' for which the surviving Manuscript is merely a trial run?

I really don’t! My sense, and this is not based on scholarship, but my feeling about the nature of the source, from having worked with it in great detail and performed and recorded it in toto and in part in many venues, is that this was a personal document. I have to observe that, in the 1680s the majority of music did not find its way to a publisher – that would have been the exception rather than the rule. And, of course, published works, from this period are full of many stimulating and fascinating lacunae!

You speculate that the author was probably a nun at the South Austrian convent where the Manuscript was found (and therefore, due to the frequent anonymity of composer-nuns at this time, likely to remain unidentified forever). But in what context would these works actually have been performed? Would the convent itself have had a fairly rich musical life?

My answer to this would be to look at the life of Giuseppe Tartini, seventy years later, at the Basilica S. Antonio in Padua. It’s clear that his use of solo instrumental works took the form of what one might describe as a personal musical office – that this ‘practice’ was in some way linked to devotional activity – as every part of the day of anyone part of a religious order is. Like so much music of the late seventeenth century, my interest is how it formed part of their life, even if what we are talking about is music which is played for oneself and for a small group of friends. In that respect, I have to say that I find a clear relationship between the practice of music that a musician has in the home in any age, even my own daily practice regimen, and music like this.

The works in the Manuscript make use of characteristic scordaturae to set moods – a practice that might be familiar to those who know of Biber’s Rosary Sonatas. It seems to have been a common technique at the time, but is virtually un-used in later violin writing. Why do you think this practice died out – is it connected to the evolution of the instrument itself?

The thing is, that it never died out – Bach, Mozart, Schumann, Saint-Saens, Paganini, Mahler, Bartók, Jolivet, and many composers since, continued to use the technique, to heighten certain affects and effects – and of course, it is fundamental to many folk violin traditions, from Norwegian ‘Slåtter’ through to Bluegrass violin. Many composers today use it – amongst the composers that I have collaborated with closely from Henze (Second Violin Concerto) through to the great Cypriot composer Evis Sammoutis the practice offers a fantastic range of colouristic opportunities: but, to return to the true substance of your point, the examples offered by Villsmayr, Biber, Marini and more in the seventeenth century are inspiring for the development of the violin in our time. 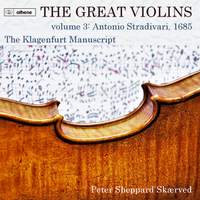 Your choice of the more restrained sound of the square piano reflects the idea that works of this period were actually intended for a relatively intimate performance setting. Do you think that paradoxically we lose something by performing them in concert halls and using more extroverted keyboard sonorities?

I don’t have much time for modern concert halls – and find more intimate acoustics, from nineteenth-century salon/music rooms to small Nordic chapels, offer so much more. I completely agree that very often, there’s a crudity which results from the effort that (often misguidedly) is made to ‘project’. Christopher Wren described his spaces as ‘auditorys’. I think that often describes the scores themselves, and nineteenth-century Viennese chamber music is served well with being thought of in that light – this does not mean that there is any lack of drama, but rather, that the drama is in the music, not in the work to articulate the music in a large room.

You refer to intra-European differences in violin-making in previous eras, with German and Italian instruments adapted to the prevailing trends in performance spaces (and even construction materials) in those two regions and producing audibly different tone-colours as a result. Was this dichotomy still in evidence by Schubert’s own time?

That’s a really good question, and I would say that it’s complicated because with the various bifurcations which had resulted from the age of revolution and war, the end of the era of patronage, there was far less likelihood that any assembly of musicians would have a ‘matched’ set of instruments or even technical approach. Berlioz noted this, with no little frustration, in his memoirs. But new standardisations began to emerge, particularly emanating from the great violin-playing school that flowered from Paris, and the new breed of travelling virtuosi, from Lafont and Paganini, to Spohr and Slawik, and which to a degree, met with agreements and challenges, as they ‘travelled’ literally and figuratively from city to city . The standardisations and modernisations of instrument set up proceeded in equally fitful manner – Paganini had his del Gesu ‘converted’ to a modern neck set-up in Vienna (by Sawicki) in 1828 (at the same time that Schubert heard him), but never was ‘converted’ to the Tourte-model bow. That might be said to be an indication of the transalpine contrast in approach to sound, which was complemented/contradicted by the differences between the makers working in the German-speaking and Italian principalities.

The name sonatina is often seen as implying a less challenging, and less substantial, work than a sonata, with a certain minimum level of difficulty being implicitly required for a work to be regarded seriously. Do you think these pieces’ relative simplicity, and their labelling as 'sonatinas', has hurt their reputation today?

I would say, that it’s been a mixed blessing. Many of us studied these pieces as children, because of the name (which is a great thing -the sooner anyone has the chance to play Schubert, the better!), but the problem which resulted was that there was a lack of understanding that the apparent simplicity (like the Fifth Symphony) is in point of fact only possible with enormously sophisticated technical and compositional command and limitless imagination. Diabelli’s attachment of the moniker ‘sonatina’ can prevent the awareness of this. 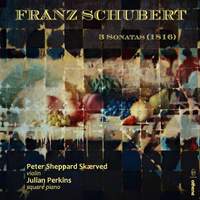 Cowie notes in his comments that he takes a kind of visual-first approach to music – 'seeing before hearing, drawing before composing'. Do you think this relatively unusual approach is apparent in the music when one comes to perform it or listen to it?

This is a difficult question for me, because I share this approach to my work with Ed (we share our work as artists), so I don’t see it us unusual – I draw and paint every day (and have done for most of my life). So, the intertwining of these disciplines is quotidian for me. It does mean that I can ‘see/hear’ what he is doing at some speed.

GAD for solo violin is named directly after Generalised Anxiety Disorder, and Cowie explains very freely that he composed it during a period when he struggled with this disorder and consciously decided to continue working even during the challenging episodes. How far do you think this very personal, and quite difficult, genesis comes across in GAD?

The answer that I can give relates to how we are when we perform any piece, and most particularly, what part teleological tools, or prolepsis plays in our execution of a piece. With GAD, the experience of playing the piece is completely ‘in the moment’, any performance or recording of the piece is ‘what happens’ to the player as they play it – much as the composer described composing it. I never know what is going to happen; the notes and the technique are the most insignificant integers of the work, which IS the genesis that Ed describes. The listening experience is the same – the listener either enters into this world, or they will miss the piece. It’s not ‘easy’ and nor should it be.

Cowie also mentions being 'more inspired by natural history than by musical history', though also alludes to having intentionally moved away from serialism and related structures in the late ‘60s. Who would you say were the main people who helped shape his style – and indeed, are all of them composers or even musicians?

I would say that the main people who shaped his style were animals, birds, environments, mountains, clouds, streams, beaches, mathematics, particle physics … and all the life that fills them, from the flight of birds to the quiver of a cold-water mirage, from the immense daily power of the tide through to the dust on a moth’s wing. These are all part and parcel with the composers whose music he loves, from Haydn to Messiaen, and describe his own feeling for his own music, which he often describes as a habitat. His imagination always reminds me of the opening of Ovid’s Metamorphoses: ‘In nova fert animus mutatas dicere formas corpora’ ('My spirit is resolve to speak of forms transformed to new bodies'). 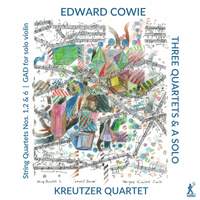