Interview,  Guy Johnston and Tom Poster on Themes and Variations

Cellist Guy Johnston and pianist Tom Poster have been performing together for two decades at venues all over the world - but hitherto had never recorded an album together. "Themes and Variations" is their recording début as a duo and features (as the name might suggest) sets of variations by Beethoven, Mendelssohn and Martinů alongside other medium-sized works for cello and piano.

I spoke to both Guy and Tom about the story behind the album and their twenty-year friendship.

It would be unfair to call the works on this album insubstantial, but nor are they as weighty as a collection of sonatas might be. Why did you choose to focus in on these smaller, perhaps more intimate, works?

The cello and piano repertoire is a particularly rich source of medium-length masterpieces. The majority of works on this album are too big and profound to be described as miniatures, yet are far shorter than the average sonata. Whereas the violin and piano repertoire contains a fair number of fluffy and insubstantial showpieces with the piano in a largely accompanimental role, the lyrical, soulful nature of the cello-piano combination has tended to lead composers to more profound utterances, even in the smaller forms. There’s certainly plenty of charming music on this album - the virtuosic Chopin Polonaise and Saint-Saëns’ famous Swan, for example - but there are also works as thoughtful and moving as any sonata: the pieces by Schubert, Schumann and MacMillan spring to mind. Focusing on these single-movement pieces also means we were able to pack more composers into this album than a sonata programme would have allowed, showing a wide cross-section of the works which have meant the most to us over the past twenty years.

You mention having first met as finalists in the BBC Young Musician Competition about two decades ago. Naturally, such competitions pit players of various instruments against one another in pursuit of one single prize. Have you ever felt that there’s an element of rivalry between you, or is that not something you ought to admit…?

Afraid it’s not as juicy an answer as readers might hope for, but in our experience, competitions are far more likely to lead to friendships and collaborations than to rivalry and hatred! Most musicians share a healthy suspicion of competitions, even while we‘re doing them, as well as a mutual understanding of the absurdity of the competition process in an art form which transcends such comparisons. That said, I think we’d both acknowledge the importance of the BBC Young Musician competition to us - for a start, playing concertos with the BBC Philharmonic as teenagers is a pretty special experience; and the Middle East tour which followed was where we first realised how much we’d like to collaborate. And while genuine rivalry would probably kill a duo partnership pretty quickly, working with the most treasured colleagues can certainly spur us on to try to play even more beautifully in order not to let the team down!

The notes to this album contain a few references to the kinds of anecdotes that have done the rounds in green-rooms since time immemorial. Do you think these experiences – hair-raising, amusing and sometimes even moving – help to weld an ensemble or duo such as yours together, or do you simply focus on the music once you get on stage?

As in life, the hilarious moments where things don’t quite go to plan are often the most bonding of all experiences. Of course we always try to put the music first when we’re on stage, but sometimes it can be a challenge - as for example when a piano shoots several feet across the floor in the middle of a live BBC radio broadcast. That particular experience definitely gave us a heightened sense of focus for the remainder of the concert!

It’s not uncommon for cellists to, as you put it, “borrow” repertoire from the horn; Beethoven’s Sonata has been adapted in this way, as has Schumann’s Adagio and Allegro which you feature on this album. How much do you think this process of musical translation alters the character of the piece?

In both of the cases above, it was the composers who suggested the cello as an alternative to the horn, so the cello versions are entirely authentic, rather than adaptations. Schumann’s Adagio and Allegro definitely contains passages particularly idiomatic to the horn, most obviously the hunting calls of the Allegro; but in the opening Adagio, the cello has the advantage of being able to sustain the long melodic lines without having to worry about snatching breaths! And both instruments - cello and horn - perfectly suit the elegiac qualities of Schubert’s exquisite song Auf dem Strom, for which we were lucky enough to be joined by James Gilchrist in the album’s one trio item.

The majority of the music you’ve chosen to feature is melodiously and unashamedly Romantic; it’s certainly an idiom to which the cello lends itself particularly well. Do you think this era was the “golden age” as far as the combination of cello and piano is concerned, or is there still a place for this sonority in the world of contemporary composition?

The lyrical, vocal qualities of the cello, in combination with the rich harmonic possibilities of the piano, certainly inspired many of the romantic composers to pen some of their most beautiful music; it really is a treasure trove for us. But we’ve always made sure to include works by more contemporary voices at the centre of our repertoire too - James MacMillan’s Kiss on Wood is one of our favourites - and seeing as much contemporary music seems to be once again focusing on lyrical, melodic elements, we hope that this supreme combination of instruments will prove a timeless vehicle of expression!

As you say in the sleeve-notes, you’ve now been playing together for half your lives; how do you think the nature of your musical partnership has changed or evolved in that time?

We’ve shared a lot of amazing experiences over nearly twenty years as friends and colleagues, and all the life experiences, the ups and downs, have seemed to feed into our music-making. Sharing chamber music experiences with friends is truly one of the greatest joys in a musician’s life, and we’re looking forward to seeing where the journey takes us over the next twenty years and beyond! 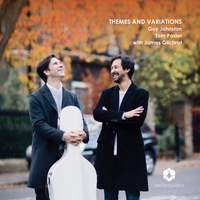