One of the most fascinating albums of contemporary music to come my way this autumn was Graham Fitkin's complete compositions for string quartet, recorded by the Sacconi Quartet (who premiered several of the works) and released on Signum last Friday - ranging from the two-minute 'Small Quartet's to Inside (lasting almost half an hour), there's a hypnotic energy about these pieces that has had me returning to the disc time and again over the past month or so. I spoke to Graham from his home in Cornwall last week to discover more about the evolution of his relationship with both the genre and the specific groups for whom he's written, the composers who've inspired him since childhood, and his plans for the future...

The new album from the Sacconis brings together your complete works for string quartet to date: do you have plans to write more, and how would you say your approach to the has medium evolved over the course of the fifteen years represented on the recording?

At the moment, no - but I would love to! I haven’t written a string quartet for ten years but it’s a medium I now enjoy a great deal, whereas when I started writing for it I was a bit scared of it!

When I started composing (I’m thinking back to the 1990s and even earlier), much of my music was about clarity. I still am very keen on clarity, and on making my point in as efficient and as elegant a way as I can - but then it was more about straight lines, about bold gestures rather than subtleties. I’m not being critical of my early works as opposed to the later ones, but when I was younger there was a desire for certainty – whereas now I still have that desire but I don’t see any certainty in the world at all! So everything’s now much greyer, rather than black and white.

Over those fifteen years, you've also written numerous larger-scale works and done residencies with various orchestras - has working on these broader canvases fed into your chamber-music writing?

I’ve worked with the London Chamber Orchestra on a number of string orchestra-based pieces – one of the pieces I did for them was a piano concerto, scored for string orchestra, percussion and piano, and I’ve also done a clarinet concerto for same forces. I’m a big fan of the string orchestra and I’m still in talks with the London Concert Orchestra about doing a recording of that repertoire in the future. Laurence Crane (who wrote the sleeve-notes for the recording) said something at the end of his booklet-essay about one of the pieces not being a million miles away from Tippett: that wasn’t something I’d ever really thought about, but actually there’s a lot of Tippett’s music which I do love. There’s an Englishness to it, as well as something instantly recognisable about it all, which I certainly aspire towards: I might not be writing the same sort of music, but I’d love to evoke that same sort of feeling.

On first impressions, I heard the occasional echo of Bartók’s quartets, as well as elements of some American minimalists – were either of these conscious influences?

A lot of my music’s been informed by minimalism (not just the Americans, but minimalism more generally): that directness of approach and clarity is definitely there. I love Bartók’s string quartets, and was in fact listening to a lot of them when I was writing Inside. The problem is that when you start listening to something as extraordinary as those works, everything else seems to pale into insignificance, and any confidence I might’ve had in my abilities at that moment just went down the drain! For that reason I will often avoid listening to other music when I’m in the throes of composing - but there is still a strong sense of being influenced (often unconsciously) by the composers I’ve listened to since I was a kid, and that would include Stravinsky and Bartók and some of the minimalists.

Do you recall having a specific ‘lightbulb-moment’ (either as performer or listener) which made you realise that the string quartet would become such a significant genre for you as a composer?

I’ve had quite a few of those 'lightbulb moments' in my composing career, but my epiphany with regard to the string quartet came about simply through looking in detail at Mozart. The first time I ever really listened to quartets in a major way was when I was at college: I was studying and analysing some of his quartets (in particular the Dissonance), and there was a turning-point where I just thought ‘What a medium this is!’. I love the homogeneity of timbre, but there’s also so much potential and depth. You can get so many different colours: it can be big and bold and in your face, but it can also be incredibly intimate. For me personally, I think it works in a way that the wind quintet has never worked – of course there are some great pieces written for wind quintet, but in a way it’s almost in spite of the formation of those actual instruments. But with the string quartet, everything seems to gel very well for me.

All of your compositions for string quartet to date have been single-movement works – have you deliberately avoided the four-movement Classical structure?

I think early on I probably did – I was feeling a bit anti-anything like that. (By ‘early on’, I’m talking about the 1980s and early 90s, when I’d finished my studies and embarking on the life which I now lead). At that point I thought ‘Why do I need it? If my piece is about something which is fast and big, then don’t muck about having a slow movement in the middle just for contrast!’. It just didn’t seem to be relevant. Later on I started incorporating slow and fast sections within the same piece – in Servant, for instance – but that’s part of the whole package rather than concentrating on those different elements at different times.

Does any of your music have a programmatic or extramusical dimension?

Most of my pieces are intramusical in that I don’t consciously think about extramusical things and then do something about them in music, but Pawn (2004) really grew out of my dissatisfaction with democracy. During the various wars that were going on in Afghanistan and elsewhere, I found myself getting really annoyed by the way apparently democratic decisions were made because somebody somewhere at the top of the tree had an agenda. All of that very much informed the fact that Pawn is a very bleak piece, where the way I was feeling at the time definitely comes across: about how democracy, which I thought of as a great thing, didn’t seem to be working the way it should. Everything in that piece is tethered down to a rather unforgiving rhythmic unison: it starts with a sequence of very slow chords, which then transitions into faster music halfway through. But there’s no sort of give at all – there’s a rigour about it which is something I wouldn’t have done if I hadn’t been thinking about the things I was thinking about at that time.

Did you train as a string player yourself?

No, I’m actually a clarinettist: I did start the violin when I was young, but I was put off it by a teacher who used to hit me with a bow! It’s amazing what the right or wrong teacher does to you, and my clarinet teacher couldn’t have been better – if it wasn’t for her then I wouldn’t be a musician at all! Those are very precious people.

The works on the album were commissioned and premiered by various different ensembles – how much do you collaborate or tailor your music for specific musicians?

I do like working with people I know, and it’s nice to get to know musicians during the composition process. Obviously you have to start somewhere, but then relationships develop, and I much prefer working with groups to just sitting at home writing my music and then saying ‘Here - it’s all done!’. It’s fantastic to get to a point where you know what someone’s strong points are, what they can really bring to the music. That applies to most of my other work, actually: I’ve written quite a lot for the pianist Kathy Stott, including solo pieces, a duet for her and Yo-Yo Ma, and the two-piano concerto Circuit.

As regards the music on the album, I knew the players of the Smith Quartet individually, and I also knew what repertoire they were doing at the time - because I was living in London then, we used to chat a lot about their inspirations as a quartet and how they felt about music, what they loved, their passions. It's rather nice to have that chance – but of course it doesn’t mean it’s unplayable by another quartet! The Sacconis were the actually the last quartet that I wrote for, and they were the ones who approached me to record this CD: they were just lovely to work with throughout the entire process, so it’s been a complete joy. 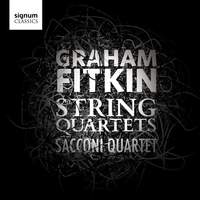 Graham Fitkin's complete works for string quartet (to date!) were released on Signum Records on Friday.