Interview,  Gawain Glenton on Music in a Cold Climate

The debut release from cornettist Gawain Glenton's new early music ensemble, In Echo, connects up the dots between the various ports and cities of the Hanseatic League. Music in a Cold Climate traces an intriguing web of musical traditions and schools across Northwest Europe, while a striking new work for old instruments - Andrew Keeling's Northern Soul, commissioned for In Echo - provides a link right up to the present day. I caught up with Gawain at the tail-end of 2017 to talk about this album, and about how the Hanseatic world relates to, and informs, our own time.

The notes to this album repeatedly extol the cultural benefits of the trade and transport links of the Hanseatic League; you refer to “musicians who looked beyond their own shores and towards a sense of shared European culture and understanding”. Do you think the musical cross-pollinations of the League, the results of which you’re showcasing here, have parallels in our own time?

I believe so, yes. Many things have obviously changed, not least the ways in which musicians go about finding employment (we no longer rely quite so much on the patronage of fickle monarchs for instance), and we can now access virtually any kind of music via our phones, without travelling. Musicians do still move from country to country though, and it's impossible not to learn new things in the process. This can be as a result of meeting colleagues from different cultures and backgrounds, or by visiting the very buildings and instruments used by seventeenth-century musicians. I clearly remember when a Swedish colleague taught me traditional tunes on his evocative bukkehorn - itself a sort of folk forerunner of my own instrument the cornetto. Encounters like that still go on, and they deepen you as a musician.

To put the contrary view, in the interests of balance and impartiality: do you feel the mixing of musical traditions from London to Tallinn and beyond might have resulted in any loss of artistic identity for the individual regions along the North and Baltic coasts? Do writers from the League’s heyday bemoan a blurring of cultural boundaries or the introduction of unwanted foreign styles?

That isn't something I've noticed, but musicians didn't tend to express themselves in terms of artistic freedom or identity as we do today. There are however some good reasons to think a loss of identity would have been unlikely. One is that musicians in the sixteenth and seventeenth centuries had the freedom to improvise and ornament in virtually every sort of music. They weren't bound to play precisely what the composer wrote in the way classical musicians generally are today, and this left them free to play and improvise in their own musical accent. People's 'otherness' was often seen as an asset. When a town like Hamburg employed the virtuoso English violinist William Brade, his nationality would have been viewed positively. I think there was enough of a shared musical lingua franca to allow musicians to move around (a pavan was a pavan whether you were in London or Bremen), but not to the extent that individual styles were suffocated.

Heinrich Albert’s Das Leid ist hier is a direct response to a specific political trauma written by a man who had had suffered considerably from the wars and troubles of his time; every distracted time produces its share of 'sad pavans', of course, but this expression of deep personal grief over a failed treaty seems rather unusual. Would this mixing of large-scale politics and individual emotion have been normal in Albert’s time?

It was a surprisingly common phenomenon, particularly in the regions most affected by the Thirty Years War (1618-48). Erasmus Kindermann for instance wrote a very moving hymn Fried wo bist so lang geblieben, which spells out the name 'Ferdinand der Dritte' in an acrostic, making it both a lament and a personal plea to the Habsburg ruler. Suffering in war was also seen as a punishment from God, and we often see composers setting plaintive Biblical texts, and giving collections of music titles like Friedens Seufftzer ('Peace sighs'). Sometimes you can deduce that a particular piece has been written at the behest of a patron to celebrate a specific event (Heinrich Schütz wrote several such pieces) but often the messages seem quite personal, and that's obviously fascinating for us as performers to engage with.

In discussing Anthony Holborne in the booklet-note you refer to a rich, shared musical culture spanning the Channel (or Manche…), yet later centuries saw Britain’s reputation decline to the point of being stereotyped by some commentators as the 'Land Without Music'. What went wrong?

Did anything really go wrong? For me that argument only makes sense if one focusses too much on epoch-defining composers (or the lack of them) rather than on the music-making going on around them. I'm interested in the artisans and domestic musicians who have always formed the backbone of a musical culture. Music has always formed an important part of British life and the fact that there was no English Wagner or Brahms doesn't mean we were a 'Land Without Music'. Composers like that are like cherries on top of a cake, and I guess I'm more interested in the cake than the cherries. In that same spirit, this disc contains music by people I identify with: professional musicians who were performers first and composers second. Because they don't fit our romantic template of the artist-hero, their work is often underrated and assumed to be 'workmanlike'. I hope this disc helps people realise how far from the truth that is.

Very few recent compositions feature the cornett, sackbut or gamba, let alone all three, as does Northern Soul. Some contemporary composers have experimented with the sonorities of early music (Sally Beamish’s Shakespeare Masque with its viol consort, for example), but it’s not exactly common. What do you think sets “old-new” commissions like this apart from the rest of contemporary music?

I think it's becoming increasingly fertile territory, and we're certainly not the first early music group to venture into contemporary music. Our instruments have no modern equivalent, and this means we can offer composers and audiences an entire palette of new sounds. Our expertise in improvisation and different tuning systems can also produce interesting results if harnessed in the right way. What's nice is that our instruments are increasingly being viewed in their own right, and not just as 'funny early trumpets' or 'primitive bassoons' etc. The cornetto for instance has as much in common with the human voice or the recorder as with the trumpet, and I'm actively looking for more composers to explore those facets of the instrument's personality. In films like the original 1973 Wicker Man, early music was used to signify something wild, pagan and counter-cultural. Forty years later we're much more mainstream, but I hope we can still shock a few people from time to time. 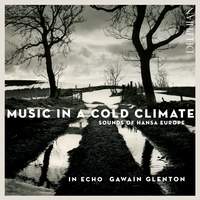 Music in a Cold Climate: Sounds of Hansa Europe

Music in a Cold Climate is released on Delphian on 19th January.