At the age of just 22, American pianist George Li has already won plaudits from critics all over the world for his performances - in 2015 scooping silver at the International Tchaikovsky Competition.

His debut disc, released this Friday on Warner Classics, is a live recording from the Mariinsky Concert Hall in St Petersburg comprising works from four of the great composers for the piano - Haydn, Chopin, Liszt and Rachmaninov.

I spoke to George about how he put this programme together, and about influences on his career so far…

This recital has been described as “a descent into deep darkness, re-emergence into the light, and a concluding, boisterous celebration”. Do you find it enhances a recital if it has a kind of programme like this – even if a very abstract one?

For me, it definitely helps to create some kind of basic arc or storyline that threads the program together. It helps to give some cohesiveness to the program, which I then do my best to convey to the audience. Of course, there are times when the pieces I play in a recital don’t have anything at all to do with each other, in which case I don’t force an arc, but here I felt like the tone of each piece naturally flows into the next.

In a recital, of course, you have to play even Haydn on a modern concert grand piano – but given a choice, where would you stand on the use of modern vs historical instruments for Classical and Baroque repertoire?

Using historical instruments for Classical and Baroque repertoire can be useful to understand the context and the original sound and color capabilities that Haydn and other composers had to work with. On the other hand, it’s hard to ignore the evolution of the keyboard into the instrument that we have today, and personally I think there’s a greater depth of sound, character and color in the latter.

You’ve mentioned having something of an epiphany when you performed with an orchestra for the first time – do you have any concerto recordings lined up to follow this solo album?

Indeed; my next planned CD will feature a couple of concerti (probably Romantic works) with orchestra, which I’m very much excited for!

Are there any pianists whose playing or recordings have particularly inspired or influenced your own style?

There are many pianists that I look up to and inspire me, but the ones that have really influenced me are the pianists from the “golden generation”: namely, Vladimir Horowitz, Alfred Cortot, Artur Schnabel, and Emil Gilels, among others. I particularly admire them for their courage to take risks and for their ability to truly project their own unique voice, colours and character through the piano. These traits are ones that I ceaselessly strive for. 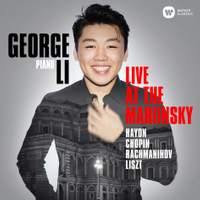 George Li – Live at the Mariinsky

George Li – Live at the Mariinsky is released on 6th October on Warner Classics.