Widely acknowledged to be one of the greatest clarinettists of the twentieth century, De Peyer was noted for the sheer beauty and evenness of his tone and the wonderful cantabile quality of his playing: his recordings of the Mozart and Brahms Clarinet Quintets in particular are still regarded as definitive, and his eloquent contribution to the first-ever recording of Benjamin Britten’s Nocturne (with the composer and Peter Pears) was another highlight in his diverse and prolific recording career.

De Peyer was born in London on 11th April 1926 and educated at Bedales and the Royal College of Music, followed by studies in Paris with the great French clarinettist and composer Louis Cahuzac. Shortly after graduation he formed The Melos Ensemble with the viola-player Cecil Aronowitz, flautist Richard Adeney and cellist Terence Weil; the group’s notable achievements would include the premieres of Britten’s War Requiem, Birtwistle’s Tragoedia and Five Pieces, and Peter Maxwell Davies’s Seven In Nomine, as well as much-praised recordings of core repertoire for medium-sized chamber ensemble such as Ravel’s Introduction & Allegro, Schoenberg’s Pierrot Lunaire, and the Schubert Octet.

As a soloist, De Peyer did much to expand recital and concerto repertoire for his instrument, inspiring new works from composers including Alun Hoddinott, Miklós Rózsa, Thea Musgrave and Arnold Cooke; he was also a great advocate of early twentieth-century French repertoire, including the Poulenc Clarinet Sonata and Debussy’s Première rapsodie.

Alongside his extensive solo and chamber work, De Peyer maintained a long-term orchestral career, occupying the principal clarinet chair at the London Symphony Orchestra from 1956-73. He also enjoyed a successful parallel career as a conductor, working on a regular basis with the LSO, English Chamber Opera and the Melos Sinfonia, and was a dedicated and much-loved teacher (he was on the staff of the Royal Academy of Music from 1959, and continued to travel widely for masterclasses and workshops until well into his 80s). 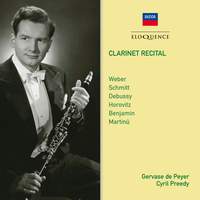 'His phrasing is like that of a human singer, but with a power, agility and range beyond any singer’s capability; technique that treats the music as though it were happening spontaneously for the first time' (Washington Post). 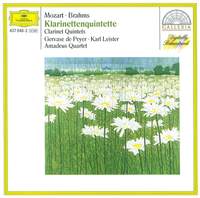 'I'd have to have this with me on a desert island. It's one of the best examples of a master getting to grips with a popular work and recreating it anew -- it's sensational' (Record Review). 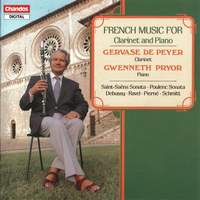 French Music for Clarinet and Piano

'In the Poulenc sonata the subtlety of both artists' tonal nuances is impressive...The remaining pieces...serve to show off different aspects of the Peyer's artistry: the Ravel is seductively atmospheric, the Pierne lightly coquettish' (Gramophone).