Friday saw the release of a Martinů double-bill by the Essener Philharmoniker - the Double Concerto and the neo-Classically-inspired single-act opera Ariane, starring Simona Šaturová. Our thanks to Supraphon and their UK distributor RSK for kind permission to share this interview with conductor Tomáš Netopil.

"In a way, it is a Classicist, pretty much lightened composition. At the time when he was writing it, Martinů was evidently inspired by Italian opera, Monteverdi in particular. The music almost seems as if it were written for children, it is simple, light. Bohuslav Martinů, naturally, employed his musical idiom, dance rhythms, ample 6/8 time. As regards the orchestra, Ariane is intended for the Classicist chamber configuration with flute, clarinet, oboe, two trumpets and piano. The opera's style actually represents a return to Classicism," mentions Tomáš Netopil among other things about Martinů's Ariane.

Thirty years ago, Ariane was recorded by the Czech Philharmonic, conducted by Václav Neumann. Do you know the 1986 album? And may it have inspired you at all?

I do know Neumann’s recording very well. And the vinyl disc actually served as my very first inspiration, at the time when I was very young. Then I somewhat forgot about it, but returned to the record when Jiří Heřman and I intended to stage the opera at the National Theatre in Prague within a single evening along with Stravinsky’s The Nightingale, directed by the SKUTR tandem. The idea was ultimately abandoned, yet we did get to present Ariane at the National, in a concert version, with Simona Šaturová singing the title role. I find the opera immensely forcible, and I have striven to perform it throughout my career - if not in its entirety, then at least fragments of it. And I have succeeded a few times in this respect.

Her voice is light, let us say, Mozartian. Her performance is cultivated, with a colossal inner charge, which is ideal for portraying the role of Ariane.

The timing of the recording sessions was great. Today, Simona possesses an astounding technique, which allows her to make use of her entire vocal range. What is more, she is highly musical and professional, profoundly involved and keenly interested in the works she performs. I take any opportunity I can to collaborate with her.

Tell us a little about the other singers featured on the recording.

I knew most of them, as they are soloists with the Essen theatre, which made my choice easier. I only had a problem with finding the singer for the lead male role, Thésée. Just a year prior to starting the recording, I saw Zoltán Nagy in Munich. He impressed me with his musicality, invention, as well as linguistic skills, as in this case it is important for the singer to be at home in French. So Nagy was the only artist I did not know previously. The excellent bass Baurzhan Anderzhanov and the brilliant young tenor Abdellah Lasri are both currently engaged with the Aalto-Musiktheater. As for the latter, I am not sure for how long the Essen company will be able to retain him, as he has been in high demand of late. Last year alone, he gave performances in Paris, Dresden and elsewhere. Lasri has an amazing, lovely and pliant voice. All these artists have helped to make my dream come true, a dream I had years ago at the National Theatre in Prague: to record Ariane.

Is it fair to say that Ariane is a very audience-friendly opera?

In a way, it is a Classicist, pretty much lightened composition. At the time when he was writing it, Martinů was evidently inspired by Italian opera, Monteverdi in particular. The music almost seems as if it were written for children - it is simple, light. Bohuslav Martinů, naturally, employed his musical idiom, dance rhythms, ample 6/8 time. As regards the orchestra, Ariane is intended for the Classicist chamber configuration with flute, clarinet, oboe, two trumpets and piano. The opera’s style actually represents a return to Classicism.

Something totally different from The Greek Passion, which was written in parallel.

In actual fact, it is not quite clear which of the two is Martinů’s final opera. Probably Ariane. After completing the first version of The Greek Passion, Martinů took a breather with Ariane, which he wrote within two months, before returning to The Greek Passion: the change in his musical language is evident. We in Essen have juxtaposed the two operas. In September, we premiered The Greek Passion, a more dramatic work, one making large use of the chorus. Ariane was presented soon after. Our pianist, who played in both productions, told me something interesting he had observed: having recently seen The Greek Passion, the audience expected Ariane to be similar, yet upon hearing the overture they began smiling, their faces lightened up. The impression was simply totally different.

Given its “lightened style”, was preparing Ariane simpler than in the case of other operas?

No, it wasn’t: it was very difficult! The intonation, the leading of melodies, the French, as well as the orchestral component – all that was very delicate and tricky. It took a lot of work.

Even though it is a relatively recent opera, does Ariane require historically informed performance?

Perhaps in respect of Bohuslav Martinů’s having been profoundly inspired by Monteverdi: I thought about it a lot in connection with, for instance, the final Lament. Martinů prescribed that it be performed with full, warm strings, yet its character may also be very gentle, lightened, so as to alleviate the artificial gravity. Yet otherwise we must comprehend Martinů according to the notation he bequeathed us. That is the alpha and omega - and that is what makes the work different from, say, a baroque opera, where the musicians must find the manner of performance through ways different to simply adhering to the score afforded to them by the composer.

You have pointed to the lightness of Ariane. The other piece on the CD, the Double Concerto for two orchestras, piano and timpani, is of a totally different nature ...

Although written in a baroque form, it is a very complex, intricate score, encapsulating the immense despair of the time in which it came into being. It encompasses gloominess, cogency and, I would say, even Bachian gravity. All this is reflected in the piece. The structure, entailing two orchestras, the munificent counterpoint they interchange, the solo piano ... All that represents a totally different level in Martinů’s compositional range.

The piano on the recording is played by Ivo Kahánek. Is he as great to work with as is Simona Šaturová?

Absolutely - working with him was a real pleasure, faultless. Ivo Kahánek is a superlative pianist. It was not the first time we had worked together, and nor will it be the last, I believe. As a frequent performer of Bohuslav Martinů’s music, he has a lot to say, and he is also able to embellish that which he plays in a compelling way.

You recorded both Ariane and the Double Concerto live, during concert performances. What, in your opinion, are the advantages of this type of recording?

In light of the current great acceleration of everything, we are approaching the time when we will not be in the position to fully devote to studio recording. Yet an orchestra facing the microphones does behave somewhat differently: it strives to pay closer attention to itself, so in this case the presence of the microphones had a very salutary effect. That is one of the reasons why my orchestra and I have been regularly making live recordings: it is a way of further refining the orchestra.

You are now preparing for Supraphon another album in your Janáček series, a project that can be branded as highly rare....

Yes, precisely, and I hope it will be intriguing. Following the first Janáček album, a purely symphonic one, and the second, vocal-instrumental, we decided to make a recording of Janáček’s opera suites. It may appear to be a somewhat anti-Janáček project, I would say, as Janáček was very particular about the texts to which he set his music - the texts played an essential role. All his melodies are actually set texts, a continuous flow of speech.

Accordingly, we were stepping on very thin ice. But I enjoyed it. To date, we have recorded the suite from Jenůfa, created by Tomáš Ille. It affords a wonderful walk through the whole opera, even though not entirely in chronological order. It is brilliantly elaborated in terms of dynamics and tectonics; Ille has retained Janáček’s instrumentation, only helping the orchestra to spread the solo voices into the orchestral parts.

The other suites on the album will be from Kátya Kabanová and Fate [Osud]. he suite from Kátya Kabanová is really tumultuous, just as the opera itself is very intense, replete with twists and turns. I have to admit, though, that getting to the core of the piece did take us a while. Yet the result is, in my opinion, forcible. The suite is actually a condensate of the opera’s already compressed psychological drama; the orchestra is employed in its entirety, just as in the opera. As regards the Fate suite, it has a totally different charge: it is pretty much dance-like, buoyant, a rapid current of energetic music, employing folk rhythms. And these rhythms serve as the framework of the whole suite. 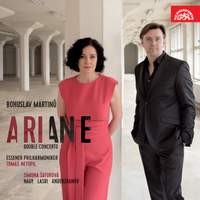