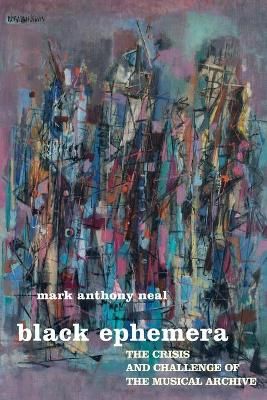 New, Black Ephemera: The Crisis and Challenge of the Musical Archive

In Black Ephemera, Neal conducts an impressive symphony of memory work. The digital frontier transformed what an archive looks like, how it functions, where it lives, and who gets access to it... — Wired More…

A framework for understanding the deep archive of Black performance in the digital era
In an era of Big Data and algorithms, our easy access to the archive of contemporary and historical Blackness is unprecedented. That iterations of Black visual art, such as Bert Williams's 1916 silent film short "A Natural Born Gambler" or the performances of Josephine Baker from the 1920s, are merely a quick YouTube search away has transformed how scholars teach and research Black performance.
While Black Ephemera celebrates this new access, it also questions the crisis and the challenge of the Black musical archive in a moment when Black American culture has become a global export. Using music and sound as its primary texts, Black Ephemera argues that the cultural DNA of Black America has become obscured in the transformation from analog to digital. Through a cross-reading of the relationship between the digital era and culture produced in the pre-digital era, Neal argues that Black music has itself been reduced to ephemera, at best, and at worst to the background sounds of the continued exploitation and commodification of Black culture. The crisis and challenges of Black archives are not simply questions of knowledge, but of how knowledge moves and manifests itself within Blackness that is obscure, ephemeral, fugitive, precarious, fluid, and increasingly digital.
Black Ephemera is a reminder that for every great leap forward there is a necessary return to the archive. Through this work, Neal offers a new framework for thinking about Black culture in the digital world.

In Black Ephemera, Neal conducts an impressive symphony of memory work. The digital frontier transformed what an archive looks like, how it functions, where it lives, and who gets access to it ... As chapters diverge in theme and latitude, the book assumes the feel of a mixtape. There's one on the pioneering Memphis record label Stax. There's another chapter on the distillation of Black women's trauma through pop culture, and one about how collective Black mourning is produced, shared, and preserved digitally. The whole is an impressive totem, and guide, to the importance of holding on to things forgotten in our haste to the future