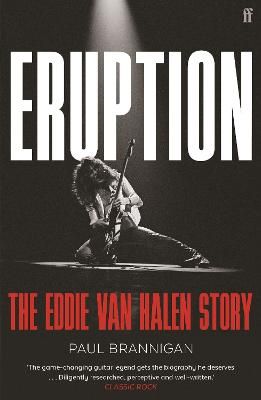 'The game changing guitar legend gets the biography he deserves ... Diligently researched, perceptive and well-written.' 8/10, Classic Rock 'An affectionate and unflinching portrait of metal guitar's Mount Everest.' Mojo Arriving in California as a young boy in the early 1960s, Edward Van Halen and his brother Alex were ripe for the coming musical revolution. The sons of a Dutch, saxophone-playing father, the brothers discovered the Beatles, Cream and others. From the moment their hugely influential 1978 debut landed, Van Halen set a high bar for the rock 'n' roll lifestyle, creating an entirely new style of post-'60s hard rock and becoming the quintessential Californian band of the 1980s. But there was also an undercurrent of tragedy to their story, as Eddie's struggles played out in public, from his difficult relationship with the band's original singer, Dave Lee Roth, to substance abuse, divorce and his long-running battle with cancer. With unique insights, Paul Brannigan's Eruption reaches beyond the headlines to explore the cultural and social contexts that shaped this iconic guitarist, while also turning up the dial on a life lived at volume eleven.