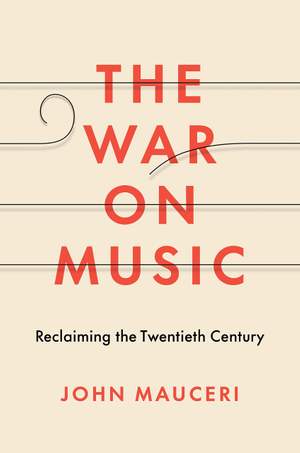 New, The War on Music: Reclaiming the Twentieth Century

"[Mauceri's] writing is more exhilarating than any helicopter ride we have been on."-Air Mail

This book offers a major reassessment of classical music in the twentieth century. John Mauceri argues that the history of music during this span was shaped by three major wars of that century: World War I, World War II, and the Cold War.

Probing why so few works have been added to the canon since 1930, Mauceri examines the trajectories of great composers who, following World War I, created voices that were unique and versatile, but superficially simpler. He contends that the fate of composers during World War II is inextricably linked to the political goals of their respective governments, resulting in the silencing of experimental music in Germany, Italy, and Russia; the exodus of composers to America; and the sudden return of experimental music-what he calls "the institutional avant-garde"-as the lingua franca of classical music in the West during the Cold War.