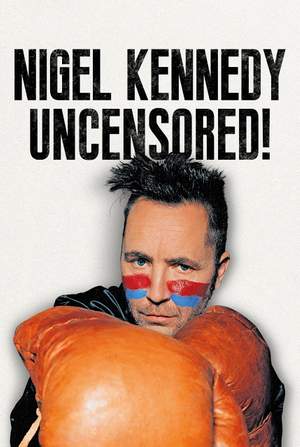 Nigel Kennedy changed the course of classical music in the late 1980s with his interpretation of Vivaldi's 'Four Seasons'. He was revolutionary: in his performance and presentation; in his technique and his open-minded attitude. A natural boundary-pusher and musical adventurer, Nigel Kennedy blew minds - and sales records - as he became the best-selling violinist of all time. Instead of an Introduction, Nigel opens with a tongue-in-cheek 'Warning': readers should beware of his politically incorrect writing style and his frank take on the BBC, record companies, the Bavarian Police and any other 'self-appointed wielders of power.' It sets the tone for a truly original memoir that is as playful, unconventional and carefully executed as his music. The book is structured like a musical performance, with 'Interludes', 'Outros' and an 'Encore' separating the regular chapters which cover Nigel's life story, from his humble beginnings and scholarship to the newly created Yehudi Menuhin School - and then New York at The Juilliard School - to his flourishing career and break-through as a world-class superstar. 'Interludes' cover subjects varying from Nigel's best and worst gigs ("It might seem strange that shit gigs stick in the mind so much more than the good ones but I suppose it makes sense..."), to run-ins with rock stars and Police forces around the world. His anecdote on the London Metropolitan Police's handling of a noise complaint at an after-show all-star jam is particularly funny: "These guys (the Met) were cheerful, they dealt with the situation and didn't escalate the problem when there wasn't one. 10/10" 'Outros' cover Nigel's thoughts on classical music today - fascinating reading from the perspective of a virtuoso - to Brexit, where the spelling of the word alone leaves the reader in little doubt as to which side of the fence the author sits. 'Encores' is a comprehensive section on Nigel's recorded output, covering his early classical work, the Four Seasons and later albums. There are insights into his work with rock musicians including Robert Plant, the late drummer Michael Lee, Killing Joke singer Jaz Coleman, and producers Eddie Kramer (Jimmy Hendrix) and John Leckie (Stone Roses). Nigel's writing on Gershwin, Yehudi Menuhin, Stephan Grappelli ('my biggest inspiration'), Jimi Hendrix and the Doors is compelling. Nigel writes of his interests outside music - boxing and football - which provide inspiration and balance to his creative output (on Aston Villa - "a true blessing for me to have an outlet in which I was surrounded by normal, honest, hard-working people who did 'proper jobs'"). There is a splendid chapter on 'Kitchen Golf', a not-without-risk variation of the game, conjured up with close friend and mischief-maker Gary Lineker, during a messy late night kitchen session. "My whole life has been spent breaking down barriers between people and this book is proof of that." states Nigel in his 'Warning'. It's a Mission Statement borne out in 'Uncensored' with aplomb.