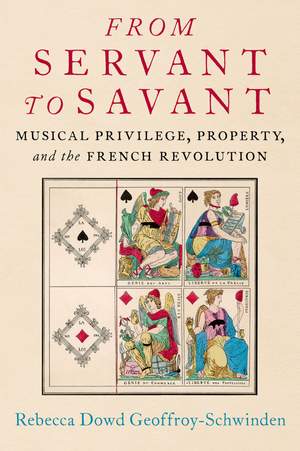 New, From Servant to Savant: Musical Privilege, Property, and the French Revolution

Before the French Revolution, making music was an activity that required permission. After the Revolution, music was an object that could be possessed. Everyone seemingly hoped to gain something from owning music. Musicians claimed it as their unalienable personal expression while the French nation sought to enhance imperial ambitions by appropriating it as the collective product of cultural heritage and national industry. Musicians capitalized on these changes to protect their professionalization within new laws and institutions, while excluding those without credentials from their elite echelon. From Servant to Savant demonstrates how the French Revolution set the stage for the emergence of so-called musical "Romanticism" and the legacies that continue to haunt musical institutions and industries. As musicians and the government negotiated the place of music in a reimagined French society, new epistemic and professional practices constituted three lasting values of musical production: the composer's sovereignty, the musical work's inviolability, and the nation's supremacy.