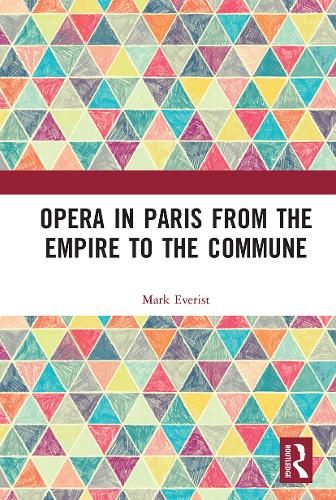 Opera in Paris from the Empire to the Commune

Studies in the history of French nineteenth-century stage music have blossomed in the last decade, encouraging a revision of the view of the primacy of Austro-German music during the period and rebalancing the scholarly field away from instrumental music (key to the Austro-German hegemony) and towards music for the stage. This change of emphasis is having an impact on the world of opera production, with new productions of works not heard since the nineteenth century taking their place in the modern repertory.

This awakening of enthusiasm has come at something of a price. Selling French opera as little more than an important precursor to Verdi or Wagner has entailed a focus on works produced exclusively for the Paris Opera at the expense of the vast range of other types of stage music produced in the capital: opera comique, operette, comedie-vaudeville and melodrame, for example. The first part of this book therefore seeks to reintroduce a number of norms to the study of stage music in Paris: to re-establish contexts and conventions that still remain obscure. The second and third parts acknowledge Paris as an importer and exporter of opera, and its focus moves towards the music of its closest neighbours, the Italian-speaking states, and of its most problematic partners, the German-speaking states, especially the music of Weber and Wagner.

Prefaced by an introduction that develops the volume's overriding intellectual drivers of cultural exchange, genre and institution, this collection brings together twelve of the author's previously published articles and essays, fully updated for this volume and translated into English for the first time.