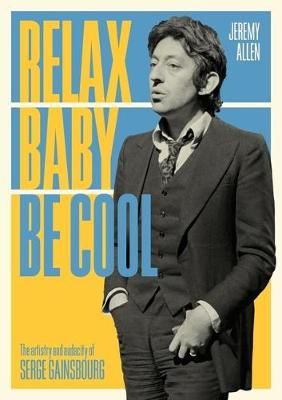 New, Relax Baby Be Cool: The Artistry And Audacity Of Serge Gainsbourg

Why has Serge Gainsbourg crossed over to the English-speaking world when so many of his contemporaries have remained largely confined to the Francosphere? What is it about this unshaven provocateur that so appeals to us? And who was the real Serge Gainsbourg anyway? Was he the sensitive seducer and songwriting colossus of the 60s and 70s? Was he Lucien Ginsburg, the son of Russian Jewish refugees who had to wear a yellow star during the Nazi Occupation of Paris? Or was he Gainsbarre, the deplorable, attention-seeking drunk who shamelessly propositioned Whitney Houston on live TV? Gainsbourg s cult has only grown since his death in 1991, and Histoire de Melody Nelson is now regarded as a classic in France and internationally. The 1971 album had only sold eighty thousand copies by 1986 when it finally went gold fifteen years after its release; its canonical elevation is a remarkable story, and there are many more remarkable stories attached to all of Gainsbourg s genre-defying, transgressive long-players. In Relax Baby Be Cool, writer Jeremy Allen takes each studio album in turn while exploring themes pertinent to Gainsbourg s life and music: jazz, performance, provocation, appropriation, postmodernism, aesthetics, metamorphosis, muses, Nazis, film and TV, Surrealism, fame, and decline. French pop music is more popular than it s been since the mid-90s, when the French touch was breaking. Gainsbourg s influence has also been huge on alternative music: from Pulp to Massive Attack, De La Soul to Danger Mouse, Black Grape to Iggy Pop, Luke Vibert to Die Antwoord, Air to Kylie Minogue. This book is full of new interviews from people who knew him, as well as younger artists who ve discovered him long after his death. Contributors include Jane Birkin, Charlotte Gainsbourg, Jacqueline Ginsburg (Gainsbourg s sister), Anna Karina, Mike Patton, Etienne Daho, Sly Dunbar, Alan Hawkshaw, Alan Parker, Jean-Claude Vannier, Tony Frank, Tony Allen, Mick Harvey, Bertrand Burgalat, Acid Arab, Jehnny Beth, Alain Chamfort, Metronomy, David Holmes, Blonde Redhead, Air, Sparks, Will Oldham, and many more.