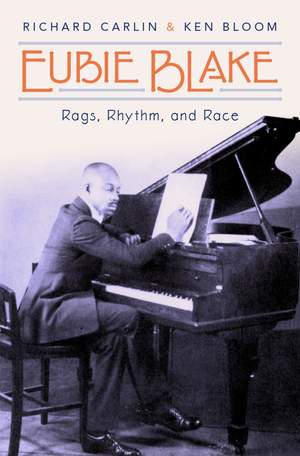 A new biography of one of the key composers of 20th-century American popular song and jazz,Eubie Blake: Rags, Rhythm and Race illuminates Blake's little-known impact on over 100 years of American culture. A gifted musician, Blake rose from performing in dance halls and bordellos of his native Baltimore to the heights of Broadway. In 1921, together with performer and lyricist Noble Sissle, Blake created Shuffle Along R which became a sleeper smash on Broadway eventually becoming one of the top ten musical shows of the 1920s. Despite many obstacles Shuffle Along integrated Broadway and the road and introduced such stars as Josephine Baker, Lottie Gee, Florence Mills, and Fredi Washington. It also proved that black shows were viable on Broadway and subsequent productions gave a voice to great songwriters, performers, and spoke to a previously disenfranchised black audience. As successful as Shuffle Along was, racism and bad luck hampered Blake's career. Remarkably, the third act of Blake's life found him heraldedin his 90s at major jazz festivals, in Broadway shows, and on television and recordings. Tracing not only Blake's extraordinary life and accomplishments, Broadway and popular music authorities Richard Carlin and Ken Bloom examine the professional and societal barriers confronted by black artists from the turn of the century through the 1980s. Drawing from a wealth of personal archives and interviews with Blake, his friends, and other scholars,Eubie Blake: Rags, Rhythm and Race offers an incisive portrait of the man and the musical world he inhabited.