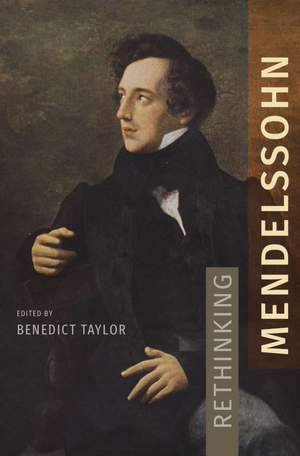 With its wide range of topics, this volume suggests a positive direction for the future of Mendelssohn scholarship; it is a welcome model for 19th-century musicology in general — Choice

As one of the foremost composers, conductors, and pianists of the nineteenth century, Felix Mendelssohn played a fundamental role in the shaping of modern musical tastes through his contributions to the early music revival and the formation of the Austro-German musical canon. His career allows for a remarkable meeting point for critical engagement with a host of crucial issues in the last two centuries of music history, including the relation between musical meaning and social function, programmatic and absolute music, notions of classicism and Romanticism, modernism and historicism. It also serves as a pertinent case-study of the roles political ideology, racism, and musical ignorance may play in creating and perpetuating a composer's posthumous reception. Fittingly, Rethinking Mendelssohn focuses on critical engagement with the composer's music and aesthetics, and on the interpretation of his works in relation to contemporaneous culture. Building on the renaissance in Mendelssohn scholarship of the last two decades, Rethinking Mendelssohn sets a fresh and exciting tone for research on the composer. Opening new ways of understanding Mendelssohn and setting the future direction of Mendelssohn studies, the contributing scholars pay particular attention to Mendelssohn's contested views on the relationship between art and religion, analysis of Mendelssohn's instrumental music in the wake of recent controversies in Formenlehre, and the burgeoning interest in his previously neglected contribution to the German song.

With its wide range of topics, this volume suggests a positive direction for the future of Mendelssohn scholarship; it is a welcome model for 19th-century musicology in general