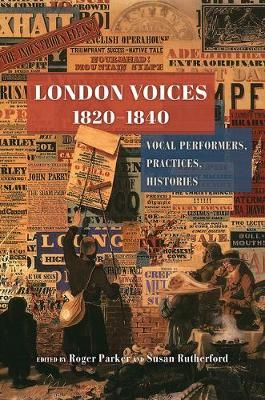 London, 1820. The British capital is a metropolis that overwhelms dwellers and visitors alike with constant exposure to all kinds of sensory stimulation. Over the next two decades, the city's tumult will reach new heights: as population expansion places different classes in dangerous proximity and ideas of political and social reform linger in the air, London begins to undergo enormous infrastructure change that will alter it forever.

It is the London of this period that editors Roger Parker and Susan Rutherford pinpoint in this book, which chooses one broad musical category--voice--and engages with it through essays on music of the streets, theaters, opera houses, and concert halls; on the raising of voices in religious and sociopolitical contexts; and on the perception of voice in literary works and scientific experiments with acoustics. Emphasizing human subjects, this focus on voice allows the authors to explore the multifaceted issues that shaped London, from the anxiety surrounding the city's importance in the musical world at large to the changing vocal imaginations that permeated the epoch. Capturing the breadth of sonic stimulations and cultures available--and sometimes unavoidable--to residents at the time, London Voices, 1820-1840 sheds new light on music in Britain and the richness of London culture during this period.