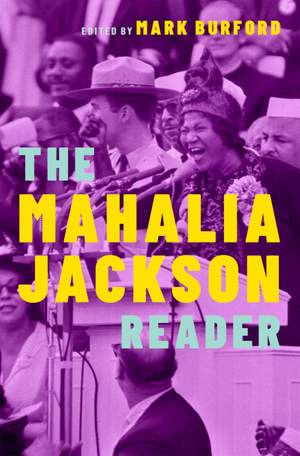 Born in New Orleans before migrating to Chicago, Mahalia Jackson (1911-72) is undoubtedly the most widely known black gospel singer, having achieved fame among African American communities in the 1940s then finding a wide audience among non-black U.S. and international audiences after she signed with major label Columbia Records in 1954. The newest entry in OUP's celebrated Readers on American Musicians series,The Mahalia Jackson Readerplaces Jackson's musical performances and their reception against key changes in 20th-century America, changes that include transformations of the recorded music industry, the increasing visibility of the civil rights movement, a florescence of Cold War-era religiosity, and an explosion of popularity of black gospel music itself. Jackson's career combines parallel tracks as a black church singer and as a national pop celebrity, and makes her one of the most complex and important black artists of the postwar decades. Gospel is a particularly challenging genre to study because of the paucity of sources. Becauseof Jackson's celebrity, there is more substantial coverage of her life and work than other gospel artists, but Jackson scholarship is still largely dependent on trade biographies from the 1970s for source material. For this reader, Mark Burford has gone beyond the standard biographies and has drawn from extensive archival research, including in the volume interview transcripts and the largely-untouched papers of Jackson's associate Bill Russell, who kept a journal tracking Jackson's activities from 1951 to 1955. The new sources - in particular Russell's notes - uniquely enable an assessment of the reciprocal relationship between the two careers Jackson pursued, essentially simultaneously: as an in-demand church singer in Chicago, and as a media star for a major network and recording label.