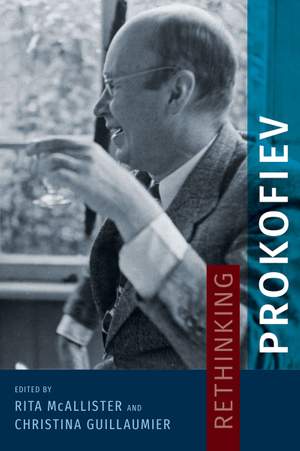 the editors set out to complicate and contextualize a general perception of the composer as an ambition-compromised victim of Soviet power. The volume's list of contributors ranges in terms of... — Opera News More…

Among major 20th-century composers whose music is poorly understood, Sergei Prokofiev stands out conspicuously. The turbulent times in which Prokofiev lived and the chronology of his travels-he left Russia in the wake of Revolution, and returned at the height of the Stalinist purges-have caused unusually polarized appraisals of his music. While individual, distinctive, and instantly recognizable, Prokofiev's music was also idiosyncratically tonal in an age when tonality was largely passe. Prokofiev's output therefore has been largely elusive and difficult to assess against contemporary trends. More than sixty years after the composer's death, editors Rita McAllister and Christina Guillaumier offer Rethinking Prokofiev as an assessment that redresses this enigmatic composer's legacy. Often more political than artistic, these appraisals have depended not only upon the date of publication but also the geographical location of the writer. Commissioned from some of the most distinguished and rising scholars in the field, this collection highlights the background and context of Prokofiev's work. Contributors delve into the composer's relationship to nineteenth-century Russian traditions, Silver-Age and Symbolist composers and poets, the culture of Paris in the 1920s and '30s, and to his later Soviet colleagues and younger contemporaries. They also investigate his reception in the West, his return to Russia, and the effect of his music on contemporary popular culture. Still, the main focus of the book is on the music itself: his early, experimental piano and vocal works, as well as his piano concertos, operas, film scores, early ballets, and late symphonies. Through an empirical examination of his characteristic harmonies, melodies, cadences, and musical gestures-and through an analysis of the newly uncovered contents of his sketch-books-contributors reveal much of what makes Prokofiev an idiosyncratic genius and his music intriguing, often dramatic, and almost always beguiling.

the editors set out to complicate and contextualize a general perception of the composer as an ambition-compromised victim of Soviet power. The volume's list of contributors ranges in terms of both geography and professional focus; a refreshing number of the authors are practicing musicians ... There's a useful glossary of fundamental cultural and musical terms, but biographical identifications are in the texts. A foreword points readers to a website, on which more musical examples, illustrations and substantial appendices will appear - a responsible, realistic scholarly model