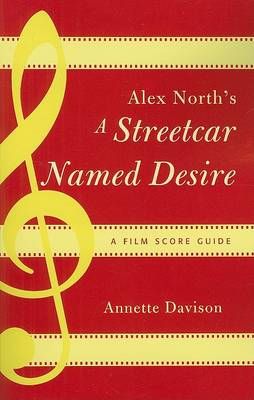 Alex North's A Streetcar Named Desire: A Film Score Guide examines the acclaimed score for Elia Kazan's much-celebrated adaptation of Tennessee Williams's A Streetcar Named Desire (1951). Situating the score within the context of Alex North's life and career, the book begins with an overview of North's musical training and his works up to his first scores for Hollywood in 1950, demonstrating how his experience in writing music for stage, concert hall, dance, and documentaries each contributed to the skills necessary for film composition. Annette Davison uses examples from North's film career to identify and describe his scoring techniques. Using manuscript and archival research, Davison explores both the play's debut stage production and the film's production process, with a particular emphasis on the genesis and development of the music heard in the film. Considering the influence and changes imposed by the film's studio (Warner Bros.), the Production Code Administration, and the Catholic Legion of Decency on the film, Davison explores the impact of these changes on the interpretation of this finely balanced drama, comparing the different versions of the film and its scores. The book concludes with a full and detailed analysis of the jazz-inflected score, taking a holistic approach and using both musicology and film studies to investigate the ways it gives a dynamic shape to the film as a whole.