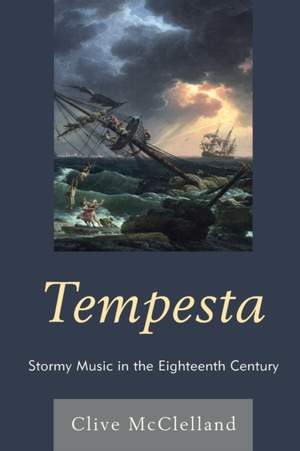 This is an interesting survey of 18th-century musical topoi that fall under the rubrics of Sturm und Drang, ombra, and Empfindsamer Stil, among others. These topoi are characterized by the use... — Choice More…

Tempesta is a term coined in this book applying to music that exhibits agitated or violent characteristics in order to evoke terror and chaos, involving ideas like rapid scale passages, driving rhythmic figurations, strong accents, full textures, and robust instrumentation including prominent brass and timpani. Music of this type was used for storm scenes, which in operas of the 17th and 18th centuries are almost invariably of supernatural origin, and other frightening experiences such as pursuit, madness, and rage. This 'stormy' music formed the ingredients of a particular style in the later 18th century that scholars in recent decades have referred to as Sturm und Drang, implying a relationship to German literature which I believe is unhelpful and misleading. Haydn's so-called Sturm und Drang symphonies exhibit characteristics that are no different to his depictions of storms in his operas and sacred music, and there is no evidence of Haydn suffering some kind of personal crisis, or even of him responding to the 'spirit of the age'. He was simply exploring the expressive possibilities of the style for dramatic/rhetorical effect. Scholars have been dissatisfied with the term for some time, but no-one has previously suggested an alternative. The term tempesta therefore applies to all manifestations of this kind of music, a label that acknowledges the 'stormy' origins of the style, but which also recognizes that it functions as a counterpart to ombra. Tempesta contributed enormously to the continued popularity of operas on supernatural subjects, and quickly migrated towards sacred music and even instrumental music, where it became part of the topical discourse. The music does not merely represent the supernatural, it instills an emotional response in the listener. Awe and terror had already been identified as sources of the sublime, notably by Edmund Burke (predating the German literary Sturm und Drang), and the latter half of the century saw the rise of Gothic literature. The supernatural remained popular in theaters and opera houses, and special music that could produce an emotional response of such magnitude was a powerful tool in the composer's expressive armory.

This is an interesting survey of 18th-century musical topoi that fall under the rubrics of Sturm und Drang, ombra, and Empfindsamer Stil, among others. These topoi are characterized by the use of minor keys, rapid rhythmic pulsations, rapid changes in dynamics, and the attempted musical depiction of heightened emotional states and storms in instrumental, vocal, and musicodramatic forms. McClelland (Univ. of Leeds, UK) does a very good job of summarizing the work that has been done previously by American and Continental scholars. His main contribution to the expanding literature on this topic is to propose the term tempesta to replace Sturm und Drang and the other terms that have come to signify "stormy" music. . . the book has much to recommend it, in particular the careful analyses of little-known symphonies and operas from the 18th century. Summing Up: Recommended. Lower-division undergraduates and above