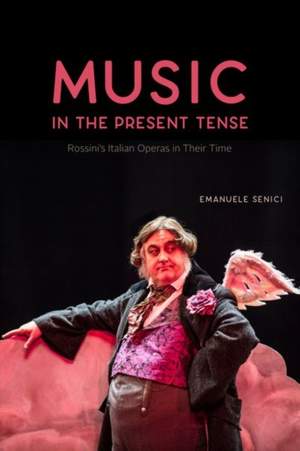 Music in the Present Tense: Rossini's Italian Operas in Their Time

In the early 1800s, Rossini's operas permeated Italian culture, from the opera house to myriad arrangements heard in public and private. But after Rossini stopped composing new works there was a sharp decline in popularity that drove most of his works out of the repertory. In the past half century, they have made a spectacular return to operatic stages worldwide, but this newly found fame has not been accompanied by a comparable critical reevaluation. Emanuele Senici's new book provides a fresh look at the motives behind the Rossinian furore and its aftermath by placing his works into the culture and society in which they were conceived, performed, seen, heard, and discussed. The book does so by situating the operas firmly in the context of the social practices, cultural formations, ideological currents, and political events of nineteenth-century Italy, revealing how Rossini's dramaturgy emerges as a radically new and specifically Italian reaction to the epoch-making changes witnessed in Europe at the time. The first book-length study of Rossini's Italian operas to appear in English, Music in the Present Tense opens up new ways to explore nineteenth-century music and addresses crucial issues in the history of modernity such as trauma, repetition, and the healing power of theatricality.