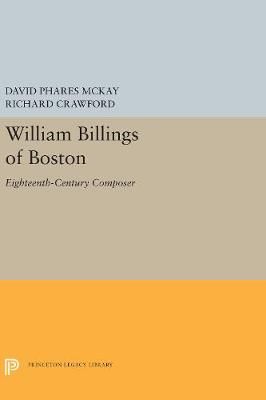 The foremost American musician of the eighteenth century, William Billings wrote more than three hundred compositions and six musical collections at a time when Americans were singing almost nothing but British music. In this study, David McKay and Richard Crawford depict the man, his music, and his place in the tradition of American psalmody.
The authors examine Billings' methods, innovations, and interaction with the Boston society in which he lived, placing overall emphasis on his influence on American Protestant sacred music.
David McKay is Associate Professor of English at Worcester Polytechnic Institute. Richard Crawford is Associate Professor of Music at the University of Michigan. He is the author of Andrew Law, American Psalmodist (Northwestern, 1968).

The Princeton Legacy Library uses the latest print-on-demand technology to again make available previously out-of-print books from the distinguished backlist of Princeton University Press. These editions preserve the original texts of these important books while presenting them in durable paperback and hardcover editions. The goal of the Princeton Legacy Library is to vastly increase access to the rich scholarly heritage found in the thousands of books published by Princeton University Press since its founding in 1905.