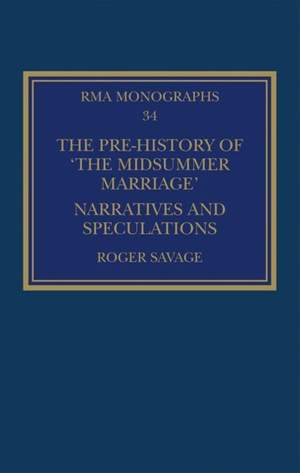 The Pre-history of 'The Midsummer Marriage': Narratives and Speculations

The Pre-history of 'The Midsummer Marriage' examines the early collaborative phase (1943 to 1946) in the making of Michael Tippett's first mature opera and charts the developments that grew out of that phase.

Drawing on a fascinating group of Tippett's sketchbooks and a lengthy sequence of his letters to Douglas Newton, it helps construct a narrative of the Tippett-Newton collaboration and provides insights into the devising of the opera's plot, both in that early phase and in the phase from 1946 onwards when Tippett went on with the project alone.

The book asks: who was Newton, and what kind of collaboration did he have-then cease to have- with Tippett?

What were the origins of and shaping factors behind the original scenario and libretto-drafts?

How far did the narrative and controlling concepts of Midsummer Marriage in its final form tally with-and how far did they move away from-those that had been set up in the years of the two men's collaboration, the 'pre-historic' years?

The book will be of particular interest to scholars and researchers in opera studies and twentieth-century music.