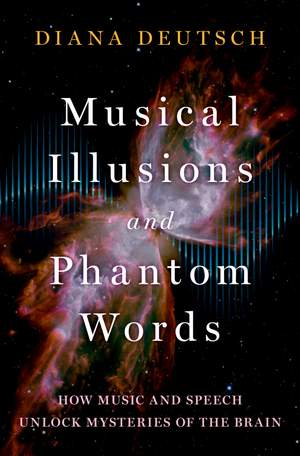 Musical Illusions and Phantom Words: How Music and Speech Unlock Mysteries of the Brain

This book covers a wide swath of mate-rial, and it holds together well. The specificity of the early chapters feed into the large concepts of the later chapters. Deutsch has succeeded in creating... — Journal of the Audio Engineering Society More…

In this ground-breaking synthesis of art and science, Diana Deutsch, one of the world's leading experts on the psychology of music, shows how illusions of music and speech-many of which she herself discovered-have fundamentally altered thinking about the brain. These astonishing illusions show that people can differ strikingly in how they hear musical patterns-differences that reflect variations in brain organization as well as influences of language on music perception. Drawing on a wide variety of fields, including psychology, music theory, linguistics, and neuroscience, Deutsch examines questions such as: When an orchestra performs a symphony, what is the "real" music? Is it in the mind of the composer, or the conductor, or different members of the audience? Deutsch also explores extremes of musical ability, and other surprising responses to music and speech. Why is perfect pitch so rare? Why do some people hallucinate music or speech? Why do we hear phantom words and phrases? Why are we subject to stuck tunes, or "earworms"? Why do we hear a spoken phrase as sung just because it is presented repeatedly? In evaluating these questions, she also shows how music and speech are intertwined, and argues that they stem from an early form of communication that had elements of both. Many of the illusions described in the book are so striking and paradoxical that you need to hear them to believe them. The book enables you to listen to the sounds that are described while reading about them.

Journal of the Audio Engineering Society

This book covers a wide swath of mate-rial, and it holds together well. The specificity of the early chapters feed into the large concepts of the later chapters. Deutsch has succeeded in creating a book that is accessible to the non-expert but has enough detail that even the most accomplished audiophile and neuro-acoustician will leave satisfied and enlightened