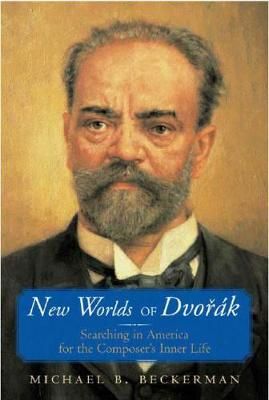 New Worlds of Dvorak: Searching in America for the Composer's Inner Life

Focusing on Dvorak's eventful stay in the United States from 1892 to 1895, this book explores the world behind the public legend, offering fresh insights into the composer's music. We see the traditional image-that of a simple Czech fellow with a flair for composing symphonic and chamber music-give way to one of a complex figure writing works filled with hidden drama and secret programs. In his cogent examination of Dvorak's state of mind, Michael B. Beckerman, a noted scholar of Czech music, concludes that the composer suffered from a debilitating and previously unexplored anxiety disorder during his American sojourn. Using Dvorak as a model, he argues convincingly that the biographical images we carry of composers condition the way we approach their music.

New Worlds of Dvorak also presents us with a wealth of new information about the origins of the composer's "New World" Symphony, its strong relationship (in the face of Dvorak's denials) to Henry Wadsworth Longfellow's epic poem The Song of Hiawatha, the Hiawatha opera that the composer envisioned but did not write, and the "Negro themes" that Dvorak claimed as a strong influence on his American works. Along the way we are introduced to a cast of characters that could easily spring from the pages of a novel. First there is Jeannette Thurber, a wealthy New Yorker who founded a music conservatory and persuaded Dvorak to direct it. We meet Henry T. Burleigh, a black composer of art music, who sang African American spirituals to Dvorak. Among the critics of the day who wrote endlessly about the Czech composer and his "American" symphony, we meet James Huneker, who derided Dvorak's claim that his music was American, even though Huneker himself played a major role in acquainting Dvorak with African American songs. We learn that Huneker was not quite the villain he has been made out to be in the Dvorak saga. We also meet the newspaperman James Creelman, who was nurtured under Pulitzer and Hearst and was an early proponent of "yellow journalism," in which the journalist plays an active role in the story being reported. Finally, we meet Henry Krehbiel, who became a friend of Dvorak's and who saw the music critic as mediator between the musician and the public, arousing interest and paving the way to popular comprehension of concert music. In this forceful reinterpretation of the composer's personality and work, readers will gain a rich new view of Dvorak that will deepen their understanding of his works, especially the "New World" Symphony and the other compositions dating from his American years.

"After having done extensive research on Dvorak and writing my novel Dvorak in Love, I thought I knew everything there was to know about the composer. Now Michael Beckerman's brilliant New Worlds of Dvorak shows me the size and number of gaps in my knowledge. . . . The CD included with the volume . . . makes it easy even for readers with not much musical education to follow Beckerman's arguments and thus experience the pleasant shock of discovering the deepest and subtlest aspects of Dvorak's great and beloved works." -Josef Skvorecky "Ingeniously conceived, thoroughly and skeptically researched, entertainingly written, and graced by a wealth of lovely audible examples, this book somehow succeeds in being both an important work of revisionist scholarship that specialists in the field will need to consider carefully and a delightful meditation on music loved by many that deserves-and will attract-a wide general readership." -Richard Taruskin, Class of 1955 Professor of Music, University of California, Berkeley