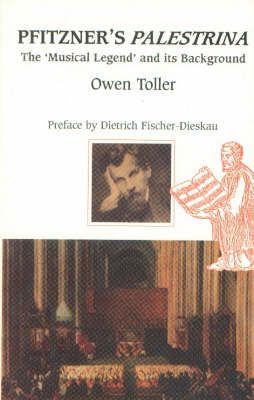 Pfitzner's <I>Palestrina</I>: The 'Musical Legend' and its Background: 1

Hans Pfitzner's `musical legend' Palestrina is considered in the German-speaking countries to be one of the supreme masterpieces of music, and yet it is all but unknown elsewhere. The opera, first performed in 1917, tells the story of the composer Palestrina, his struggle to compose following the death of his wife and in the face of anti-musical decrees from the Church, and his eventual composition of the Missa Papae Marcelli, which, it is said, was dictated to him by angles and reconciled the Church to contrapuntal music. The story, set against the historical background of the Council of Trent, is an allegory of the individual artist in society, as well as a statement of Pfitzner's own beliefs about the musical climate of his time.

Toller discusses the music and the dramatic structure, and presents a comprehensive introduction to the background material in the many diverse fields encompassed by the opera.

OWEN TOLLER is Head of Mathematics at Merchant Taylor's School; he is a member of the London Symphony Chorus and sings with a number of other groups. His interest in Pfitzner began when he sang in the first British performance of Palestrina, a semi-professional production by Abbey Opera in London in 1979.