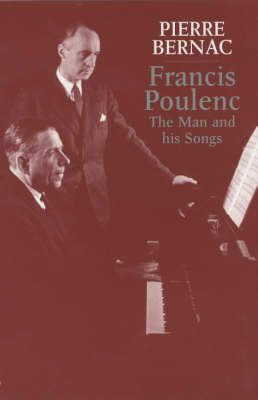 Francis Poulenc: The Man and His Songs

In 1935 the French baritone Pierre Bernac formed a duo with the composer Francis Poulenc that became a legend throughout the world. Unprecedented in the history of music, it was the first duo in which the singer and pianist were perceived as equals. It lasted for 25 years and was a determining influence on Poulenc's vocal output: more than two-thirds of his songs were written for Bernac to sing. Bernac's general book on the French repertoire, "The Interpretation of French Song", has long been the standard and indispensable work on its subject. In "Francis Poulenc - the Man and His Songs", first published in 1977, he gives us the fruit of his long association with Poulenc, paying moving tribute to the composer both as man and musician, and providing detailed analyses of every piano-accompanied song that Poulenc wrote. Each of the 137 poems is annotated for pronunciation, with a line-for-line translation into English by Winifred Radford, who also translated the text of the book. The discussion of each song is preceded by a brief biographical note on the poet and a description of Poulenc's own attitude towards both poet and poem.Bernac aimed in this book, to pass on his personal understanding of the songs of Francis Poulenc, as well as a little of their mutual experience in interpreting and performing them. He has thereby left a unique record whose importance cannot be overestimated.