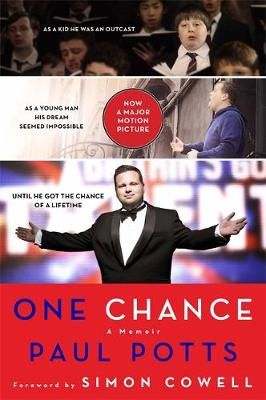 One Chance: A Memoir

The inspirational memoir by international classical music star Paul Potts , winner of Britain's Got Talent - soon to be a major motion picture from The Weinstein Company O ne Chance is the remarkable true story of Paul Potts, cell phone salesman by day, amateur singer by night, who stepped onto the stage in the premiere season of Britain's Got Talent, and changed his life. When he opened his mouth to sing Puccini's"Nessun Dorma," judge Simon Cowell and millions of viewers were stunned. Paul went on to win the show's competition and become a YouTube sensation and multiplatinum artist virtually overnight. Filled with personal recollections not featured in the film, this is the wonderful story of the shy, bullied Welsh store manager who seized his biggest dreams and won audiences around the world. The film One Chance , starring James Corden, Tony-winning star of One Man, Two Guvnors , and Julie Walters, star of Mamma Mia! and Billy Elliot , was directed by David Frankel ( The Devil Wears Prada ) and written by Justin Zackham ( The Bucket List ), and will be released in fall 2013.