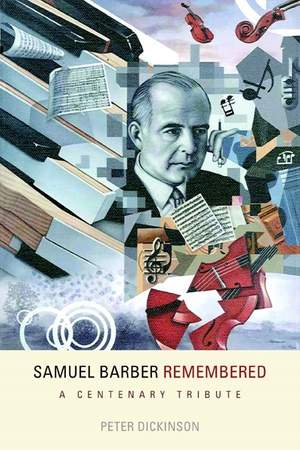 Samuel Barber is one of America's most popular classical composers. His widely beloved works include "Adagio for Strings" and Knoxville: Summer of 1915 . The main source for Samuel Barber Remembered: A Centenary Tribute is a panoply of vivid and eminently readable interviews by Peter Dickinson for a BBC Radio 3 documentary in 1981. The interviewees include Barber's friends, fellow composers, and performers, notably Gian Carlo Menotti, Aaron Copland, William Schuman, Virgil Thomson, soprano Leontyne Price, and pianist John Browning. The book also includes three of the very few interviews extant with Barber himself. Dickinson contributes substantial chapters on Barber's early life and on Barber's reception in England. The book has a foreword by the distinguished composer and admirer of Barber, John Corigliano. Peter Dickinson, British composer and pianist, has written or editednumerous books about twentieth-century music, including CageTalk: Dialogues with and about John Cage (University of Rochester Press) and three books published by Boydell Press: The Music of Lennox Berkeley; Copland Connotations; and Lord Berners: Composer, Writer, Painter.

Deftly assembled and adroitly annotated. . . . A valuable resource for Barber devotees and an excellent introduction to a man with the simplest of philosophies: There's no reason music should be difficult for an audience, is there

A composer as well as a scholar and writer, [Peter] Dickinson brings colorful immediacy to the interviews . . . [and] is generous with illustrations and bibliography. . . Summing Up: Recommended [for] all readers. -- Michael Meckna

Wide-ranging and fascinating. . . Dickinson is a talented interviewer, well prepared and deeply immersed in his topic. . . Will be appealing to anyone with an interest in post-war American music. -- Christopher M. Scheer