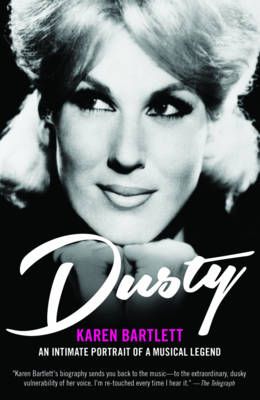 Dusty: An Intimate Portrait of a Musical Legend

"The most definitive biography yet" -Choice magazine

"A vivid portrait of a tortured soul" -Out in the City

Known the world over for her unique musical style, distinctive look and a voice that propelled her into the charts time and time again, Dusty Springfield was undoubtedly one of the biggest and brightest musical stars of the twentieth century.

Never one to be shy of the spotlight, Dusty broke the mold as the first female entertainer to publicly admit she was bisexual, and was famously deported from South Africa for refusing to play to segregated audiences during apartheid in 1964, just a year after the launch of her solo career.

Named one of the Sunday Times's best musical biographies of 2014, this is the intimate portrait of an immensely complicated and talented woman--the definitive account of one of music's most legendary figures.

Karen Bartlett is a writer and journalist based in London. She has written extensively for Newsweek, the Sunday Times, The Times, The Guardian, and WIRED and has presented and produced for BBC Radio. She was the youngest director of democratic reform and human rights campaign group Charter88, and she began her career in the UK and South Africa. Most recently, she worked with Eva Schloss, writing her Sunday Times bestselling autobiography After Auschwitz: A Story of Heartbreak and Survival by the stepsister of Anne Frank.