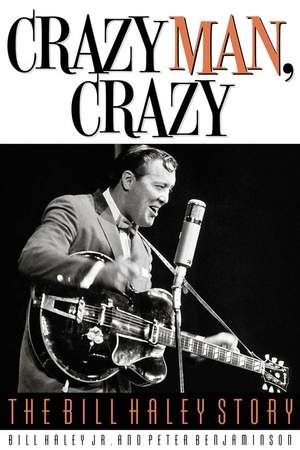 Bill Haley a the man who brought rock 'n' roll into the mainstream. His song Crazy Man Crazy was the first rock 'n' roll song to break the EBillboardE Top 20 in 1953 and was followed by his evergreen We're Gonna Rock Around the Clock the first song of its kind to hit #1. His success made him an idol not only in the US but throughout the world from Canada to the UK Europe Australia Japan New Zealand and beyond. Yet Haley is often overlooked in the story of rock 'n' roll overshadowed by others who followed him from sex symbol Elvis Presley to wild man Jerry Lee Lewis and forever-young Buddy Holly.THBut Haley's lack of visibility was in part his own doing: he had conflicted feelings about fame was extremely private suffered chronic alcoholism and troubled relationships with multiple wives which yielded ten children who he struggled to support. Though he managed to carry on a successful touring career his demons eventually eroded his health and in 1981 at the age of only 55 he passed away.THThis book is written by esteemed biographer Peter Benjaminson and Bill Haley Jr. Haley's son a musician himself who tours the world paying tribute to his father's music. Culled from interviews with insiders a from ex-wives to the Comets recorded conversations with Haley Sr. official documents diaries and more this book not only charts the happenings of Haley's career but gives insight into the Haley behind the curtain and some of the other trials he faced from the dark side of the music business to ties with Mafia. Featuring a collection of rare photographs this book is a must-have for any serious rock 'n' roll fan.