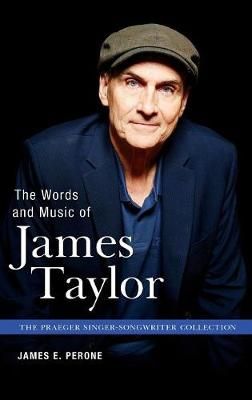 The Words and Music of James Taylor

Perone is familiar with the numerous studies of Taylor's recordings and musical life, and with this volume and others in the series, he adds significantly to the literature on popular musicians... — Choice More…

A valuable resource for James Taylor fans and a fascinating read for anyone interested in autobiographical popular music of the past 50 years.

What kinds of unusual musical forms and lyrical structures did American singer-songwriter James Taylor incorporate into his songs? What role did Taylor play in the introspective singer-songwriter movement of the 1970s? How did Taylor write and record songs that were inspired from his own experiences in life that touched so many other people?

The Words and Music of James Taylor explores these specific topics and provides detailed critical analysis of the songs and recordings of this well-known musical icon, examining his melodic writing, his use of harmony, and his often-unappreciated tailoring of musical form to enhance his lyrical messages. The book is organized chronologically, primarily around Taylor's studio albums from 1968 to 2015, and offers an introduction, a summary of Taylor's career and importance, as well as an annotated bibliography and discography.

The final section of the book presents an overview of Taylor's importance and lasting impact, an analysis of themes that run through his songs, and an explanation of how Taylor's treatment of these themes changed over the years as he matured and as the world around him changed.

Perone is familiar with the numerous studies of Taylor's recordings and musical life, and with this volume and others in the series, he adds significantly to the literature on popular musicians since the late 1960s. Summing Up: Recommended. Lower- and upper-division undergraduates; general readers