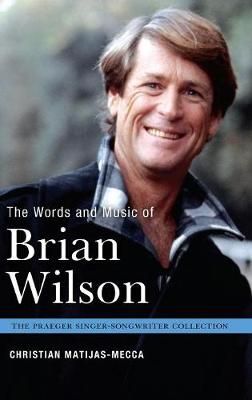 The Words and Music of Brian Wilson

A fascinating study of Brian Wilson's creative career as a composer, producer, performer, and collaborator that addresses all aspects of Brian's five-decade-long music career through his creative methods and processes.

The cofounder and central figure of one of America's most successful vocal groups, The Beach Boys, Brian Wilson is a standout artist with an astonishing volume of diverse work spanning over half a century that serves as testament to his creative output and influence on modern music. Today, Wilson stands as a survivor of life challenges stemming from substance abuse and mental illness and enjoys a revitalized career in which he continues to create new works and perform around the world to enthusiastic audiences in sold-out venues.

This unique book covers the breadth of Wilson's creative life as composer, producer, performer, and collaborator, not only as a Beach Boy, but also as a solo artist and collaborator with artists such as Jan and Dean, The Honeys, Spring, The Castells, and The Hondells. The book also surveys his less-examined work as a performer of the music of George Gershwin, of the songs from Disney films, and of children's books and movies. Because of its breadth, The Words and Music of Brian Wilson will appeal both to dedicated and casual fans alike of The Beach Boys and of Brian Wilson as well as to scholars in popular music and American studies.