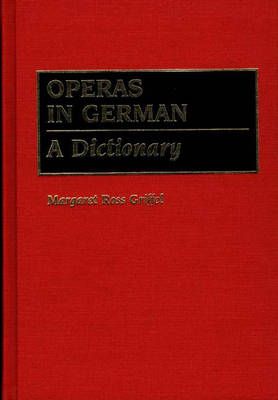 Operas in German: A Dictionary

Griffel has prepared a valuable guide to German opera that can be used profitably by both scholars and amateur devotees of opera. The main body of the dictionary provides a discussion of about 380 operas composed to a German text. The alphabetically organized entries include information on German premieres, as well as first performances in Britain and the US, brief plot summaries, listings of major roles, and occasional historical and analytical remarks. . . . Operas in German will, no doubt, serve as one of the major reference sources for any type of research on German opera. Highly recommended. Choice

Although a sizable number of opera dictionaries and encyclopedias are available, those devoted to operas in a single language are extremely rare. The present dictionary addresses itself wholly to operas written to a German text. The main body of this dictionary comprises entries on the operas themselves, permitting thorough treatment of some 350 operas. This section is augmented by an appendix of some 800 additional opera titles and annotated listings of composers and librettists. Almost all of the composers represented here were born in German-speaking countries. Among the notable exceptions is the Italian-born Ferruccio Busoni, whose operas were all written to German texts and received premieres in German-speaking cities. Composers such as Kurt Weill who wrote operas in more than one language are represented by their German works only.

The operas are listed alphabetically, excluding the article, which is placed at the end of the title. Each entry includes the title, with the English translation and alternate titles in parentheses; descriptive terms as needed; the number of acts; the composer's name; the librettist's name, the original language, and the original source of the text; the date, place, and cast of the first performance; similar information for the first United States and United Kingdom performances, if applicable; a brief plot summary; the main characters with vocal ranges; citations of especially important or noteworthy numbers; additional information such as comments on special musical problems, techniques, or other significant aspects; and other settings of the text, including non-German ones and/or operas involving the same story or characters. The entry also has a bibliography, a discography, and, in the few instances where they are available, information on video recordings. In addition to the aforementioned appendix, this dictionary contains an alphabetical listing of composers with their places and years of birth and death and an index of their operas included in this volume. The third appendix lists librettists and provides information similar to that in the composer appendix. The fourth and fifth appendices provide characters and performers, respectively, included in the main entries. The volume is completed by a bibliography. This first dictionary devoted exclusively to operas in German belongs in the reference section of music libraries and will also be of interest to scholars and aficionados of opera.