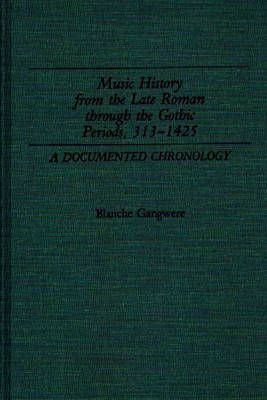 Music History from the Late Roman Through the Gothic Periods, 313-1425: A Documented Chronology

This annotated chronology of western music from 313-1425 is the first in a series of outlines covering the history of music in western civilization. The present volume covers the background, philosophy, theory, notation, style, and forms or classes of music of the periods stated and also the works of theorists or composers. Sources, facsimiles, and transcriptions of musical manuscripts and sources of treatises by musical theorists, in the original language and in English translation, are indicated where possible. The instruments of each historical period are listed and described. Musical terms are defined at the end of each chapter. Foreign words, parts of the liturgy of the Roman Catholic church, musical terms, titles of theoretical works and musical manuscripts, and names of composers, theorists, and places of interest are defined in the section entitled Definition and Pronunciation. This section also includes the translation and pronunciation of words in Classical and Ecclesiastical Latin, French, German, Italian, Spanish, Old English, and Old French. At the end of each section of the book are maps that show pertinent Empires and Kingdoms, and the areas of musical development and activity of each historical period. Appendices have been added in order to discuss notation and rhythm in greater depth and to divulge some different theories concerning the material found in the text. Supplemental sources for further study are found at the end of each historical period.