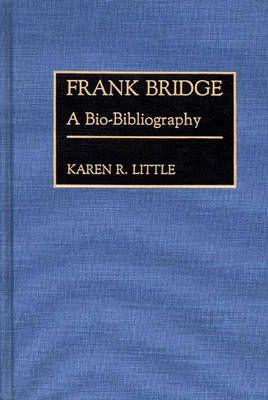 This bio-bibliography traces the stylistic development and defines the musical personality of one of the major British composers of the first half of the 20th century. Bridge's works, enjoying renewed interest since the late 1960s, are the subject of careful research in this volume, which lists his works and their performances. It includes both arrangements and orchestrations listed by genre and then alphabetically by title. Many of the works cited also feature premiere and other selected performance information.

Included in the text is a substantial discography which catalogues commercially produced sound recordings as well as an annotated bibliography containing writings by and about the composer. Contemporary performances of Bridge's work receive particular attention by the inclusion of excerpts from current reviews which signal a fresh look at this critically appreciated artist. The book concludes with two appendixes which arrange Bridge's works both alphabetically and chronologically, followed by a complete index.